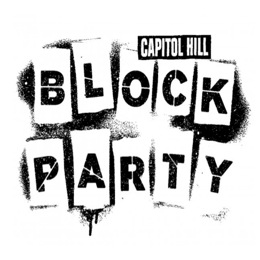 The block party on my pathetic block in Chicago is pretty much a glorified bake sale with a shitty bouncy castle which I’m not even allowed to bounce in. So the leap from my wholly depressing, completely sober, and awkward neighborhood reunion to the Capitol Hill Block Party is a paradigm shift to be sure. And to boot, its less of a block party and more of a bona fide music festival that just happens to take place on Pike Street between 9th and 11th. But the focus on the Seattle/Capitol Hill district community is what makes this a hybrid of the two, and blurs the line between something insular for the locals and something welcoming for the foreigners.

This was my first time ever in the Pacific Northwest, much less Seattle, and based on my experience, I can safely say that everyone in Seattle lies about the rain because it was 75 degrees and sunny all weekend long. Dont believe them when they tell you it always rains  theyre dirty fibbers fibbing the fibbiest of fibs.

Weather: perfect. Mix of local acts and national acts: just right. Seattle hot dogs: intimidating at first, delicious after several beers. I snapped some pictures and jotted some notes at various points during the day concerning bands, people, and experiences. I was welcomed into Seattles hood like an old friend, and it felt like I was a part of something special in Capitol Hill, and not just a tourist taking in the scenery and local fare. Thanks for the hug, Seattle.