by Megan Ritt and Meghan Brosnan 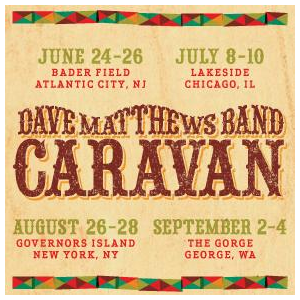 They promised us a view. Specifically, the Dave Matthews Band Caravans own website promised us that from Lakeside, the panoramic vista of downtown Chicago across the water will provide a stunning backdrop for the festivities. Instead, we got a panoramic view of security fencing and a grubby, toe-stubbing festival ground littered with broken bricks, shards of metal and glass, and a covering of wood chips that were apparently meant to improve conditions but instead lent the entire place a hamster-cage like feeling. It seems that this site of a former steel plant needs some further TLC before it becomes a staging ground for anything else. Add to this its far South Side location and overcrowded, under air-conditioned shuttle buses for the three-mile trek to and from the Red Line subway, and the result was a recipe for disaster.

And yet the Caravan was actually a lot of fun. Its savior? The music, naturally.

Even the side-stage acts were buzz-worthy: Edward Sharpe and the Magnetic Zeros, Ray LaMontagne, Ben Folds, O.A.R., the Flaming Lipsthe list goes on and on. And with the promise of a full Dave Matthews Band setlist every nightitself usually a $60+ ticketthe festival was a regular bargain for DMB-heads, who came out in full-force. It seemed to be no ones first show; it was their eighth or their third or their 30th. A small boy, when queried, offered that it was his fourth show and he was hoping to hear Time Bomb. Though mostly drunken, deeply sunburned, and backwards-baseball-cap wearing, casual fans these were certainly not.

So though they were initially overheard to complain noisily about conditions, people learned from their day one mistakes and soldiered on. They replaced sandals with sturdy sneakers, wore extra sunscreen, and drank a little less on days two and three, the better to enjoy the music without passing out from heat stroke. This bill was too good to miss.

Offered here is Consequence of Sounds snapshot of that bill. A few acts were necessarily missed (Michael Franti, why, WHY did you have to be scheduled at the exact same time as the Flaming Lips?), but overall it was a weekend jammed full of folk rock, bluesy guitars, pot smoke, and sunshine. Would we go again? To Lakeside, heck no. But to the Caravan? Sign us up.