Festival Review: CoS at Electric Forest 2011 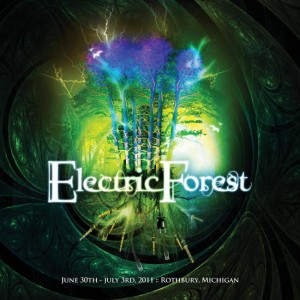 Nestled within the pristine surroundings of Rothbury, MI’s Double JJ Resort, newcomers to the area could not have expected the transformation that would take place over the extended Fourth of July Holiday. True, the resort held the previous Rothbury festivals, but with bill toppers Bassnectar, Skrillex, Edward Sharpe, and Pretty Lights, Electric Forest Festival brought a considerably different audience than the jam-band heavy editions of Rothbury. However, as in year’s past, the cornerstone of the festival is the highly decorated Sherwood Forest. Holding a small stage, Sherwood Forest was also packed with hammocks available to the masses, an amazing luxury given the unrelenting afternoon heat, breath-taking art installations, a reincarnation garden, a gong message circle, and ample trails to find (or lose) a new best friend. And the forest only became more electric as the sun went down, and the festival’s DJs took over nearly every stage.

Similar to the West Coast festival Lighting in a Bottle, the event held much more than just music. Attendees that were able to wake early enough were treated with yoga classes, hoop and poi spinning seminars, and even a morning of story telling. The resort also featured a swing set, a small pond that served as both a way to cool down during the day’s heat and as a shower alternative, and a nearby waterpark that revelers could take advantage of for only a small fee – and, if they were lucky enough, land some face time with many of the festival’s artists.

While curated for a fairly distinct audience, the String Cheese Incident-heavy lineup contained artists from across the electronic music spectrum – just how many similarities do Keller Williams and TiÃ«sto really share except working audiences into a sweaty dance party? But with stages stretching for what seemed like miles, the relentless walking through Sherwood Forest took a strain on attendees who made it for all four days. However, with the majority of festival favorites performing Saturday or Sunday, and the availability of a weekend-only pass, several thousand attendees chose to forego Thursday and Friday, a bright idea given the inclement weather that shortened several Thursday night performances and created several mud pits throughout the venue.

A failure to mention another side of the festival, a very distinct drug culture, would be a disservice to the experience. While Michigan State Police were abundant, announcements for molly, magic mushrooms, acid, nugs, and nearly every other psychedelic were never more than a few yards away. While not one to endorse experimentation to the masses, do acts like String Cheese Incident, Shpongle, Bassnectar, and/or Lance Herbstrong produce beats for the sober masses? I think not.

The following is just one writer’s journey through the Electric Forest. An event that will hopefully live on much longer than the Rothbury predecessor. Just one note to festival organizers, how about more after-parties in the camping area for 2012? Even at five a.m., the vast majority of camp was still wide awake.