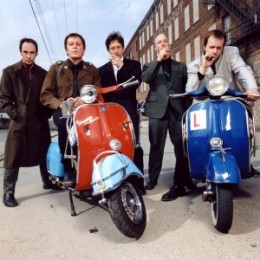 The “classic” lineup of Guided By Voices have been touring relentlessly since reuniting last September. We’ve had the pleasure of seeing them at Matador at 21 and Sasquatch!. But all reunions must come to an end eventually, and GBV have chosen their September 9th appearance at Raleigh, NC’s Hopscotch Music Festival as their farewell.

Tickets for the performance are still available, though that will likely change shortly after I publish this post. The bill for the evening also features Drive-By Truckers and Dodos.

Of course, Guided By Voices have a few other performances scheduled before their final gig, including an appearance at this weekend’s Pitchfork Music Festival. In fact, as of now, their entire itinerary consists of nothing but festival appearances. Check it out for yourself below.