Active Child – You Are All I See 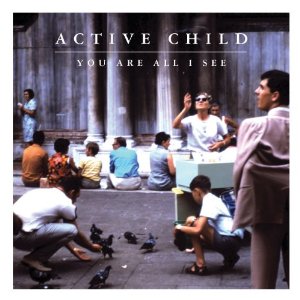 Pat Grossi: former choir boy, the driving force behind bedroom-pop project Active Child, and, with the release of You Are All I See, currently blasting to the creative forefront of, if you will, the New New Romantics. Or, as it’s been bandied about on various blogs and websites: nu-gaze, a modern shoegaze revival with notable genre leaders M83, School of Seven Bells, and just about anyone who wears a My Bloody Valentine, New Order, Kate Bush, or Simple Minds influence on their sleeve.

That New (New) Romantic signature of intense longing permeates You Are All I See, and the creative process of isolation and studio geekery is present, even heightened, compared to shoegaze music past. Instead of guitar worship, Active Child’s generation of fey Romantics have suckled on synthesizer worship, more varied sounds, and a post-“Planet Rock” planet where electronica and rap/R&B music interweave constantly.

Where is all that on You Are All I See? Direct your attention to the record’s strongest track, “Playing House”, featuring the adorably awkward bedroom R&B crooner Tom Krell of How to Dress Well. “Playing House” is sung dialogue of a breakup tearjerker where both partners want more out of a romance than they can give each other. Krell’s “That don’t make it good for anybody/Don’t wanna be in love with just anybody” is classic R. Kelly flow (though with the vocal processing, kinda more T-Pain). It just goes to show you: White nerds can do slow jams, too.

If the leadoff title track of the record and its cascading harp intro make you think of more heady fare, like Joanna Newsome, you’d be closer with that stab at comparison than, say, Bon Iver’s Justin Vernon or Washed Out’s Ernest Greene, to whom Active Child has warranted comparison. The LP’s leadoff single, “Hanging On”, released as part of Adult Swim’s Singles Program 2011, goes heavy on dub and delay, dispelling those comparisons. The heavy, symphonic percussion and synth lead of “Ivy” provides a gorgeous, Peter Gabriel-like interlude between side one and two of the record. The former side is stronger, but with a record this beautiful, you can hardly follow a track listing when you’re this engrossed.

You Are All I See doubles as a message of fondness. Grossi is “singing directly to you,” because it’s only him recording and singing his songs at home. It’s intimate, romantic, lush, gorgeous, and dripping with delectable sound. Look Pat Grossi in the eye, and get to know him. He has made one of the best records of a competitive 2011. And you are all he sees.