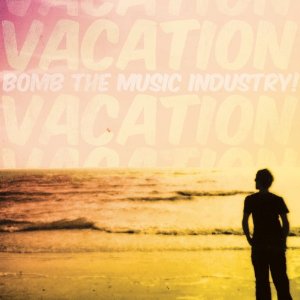 While there will always be a place for bare-bones punk rock, it’s nice when bands do some experimenting with the genre. That’s something New York DIYers Bomb the Music Industry! (BtMI!) know well. Vacation, the group’s latest full-length, is full of highly relatable lyrics and pummeling power-chord riffing, underscored by high energy and flourishes of adventurous accompaniment. It’s not exactly a deviation from BtMI!’s previous output, but it’s their most finely produced and most concentrated effort yet and shows why they boast some of the most ardent fans around.

Opener “Campaign for a Better Next Weekend” begins with warm, arpeggiated piano chords before slowly building to a fuzz-drenched crescendo and concluding with a bellowed, cooperative hook. The song is so strong that it’s hardly disappointing that everything goes slightly downhill from there. Most songs unfold the same way structurally (though the structures are typically unorthodox), but there’s enough contrast so that there‘s never a dull moment. Think of Vacation as something like a sunnier version of Titus Andronicus’ The Monitor, or even HÃ¼sker DÃ¼’s Zen Arcade: It’s ambitious and intricate, but there’s a lot to be rocked out to.

One minor complaint: Rosenstock’s vocals are usually weak and self-consciously hushed, like during the first few minutes of “The Shit That You Hate”, or so intense that they’re almost obnoxious; he rarely finds a happy medium. Nevertheless, Vacation is an all-around solid effort, undeniably fun and would serve nicely as a soundtrack for the rest of summer. What else were you expecting from these guys?