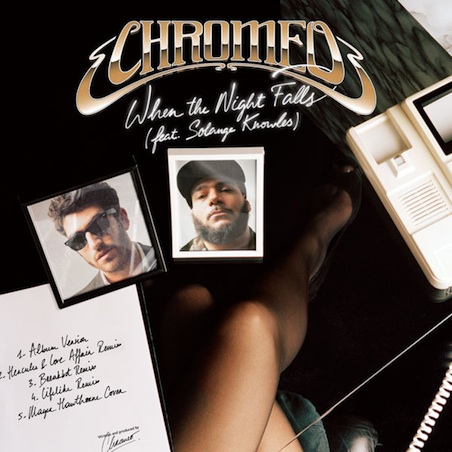 Paired alongside the announcement of a slew of new tour dates earlier this month, electro-funk favorites Chromeo also revealed plans for a remix EP featuring new versions of Business Casual‘s sultry tune “When the Night Falls”, including turns taken by Breakbot and Mayer Hawthorne. The result? Well, underwhelming. The When the Night Falls (Remixes) EP is just about as exciting as listening to the same song five times in a row can be; it’s not Chromeo’s fault. While the subtle differences are enjoyable and a cover ends up being a surprise highlight, the whole EP just recalls the old adage “if it ain’t broke, don’t fix it.”

New York-based group Hercules & Love Affair takes the first crack at P-Thugg and Dave 1’s trademark funky rhythms, toning down the funk for a more club-friendly feel. An extended middle section of repeating “oh yeah’s” atop sparse beat work adds two minutes to the original track length but does little more than that. Lifelike’s version, clocking in at a lengthy 6:33, falls into the same trap–choosing excessive, generic club music qualities to take away the primary character of the song. On the bright side, though, French producer Breakbot’s efforts yield notably more success, as he adheres to the vibe of the original song while adding a synth-heavy spin. A loop of strings paired with a pounding bass maintains the balance between club banger and Chromeo song that the others lack.

Leaving Solange and the thumping club beats behind, LA-based singer, producer, songwriter, jack of all trades Mayer Hawthorne finishes the EP with its undeniable highlight. Pumping soul into the vocal track and complementing it nicely with a slowed-down, understated instrumental track, Hawthorne leaves a nice taste in the listener’s mouth after what was otherwise a mediocre effort.