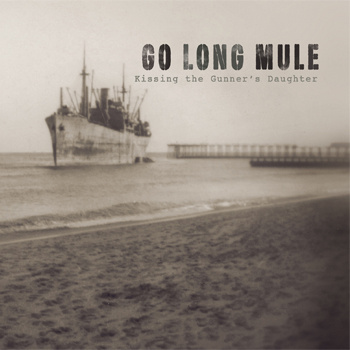 Chicago-based Go Long Mule have closer ties with American rock, country, and folk than they do with the Windy City. Describing themselves elsewhere as “folk n’ roll”, their debut album, Kissing the Gunner’s Daughter, sounds a little bit like Noah and the Whale at times. “Sailor”, with its nice skiffle beat-led track and Johnny Cash-style bass line, is one of the better tracks, along with “Rattles”, which is similar in tone and tempo, although it loses some of the quality of the earlier track.

It’s on “Ghosts”, though, that Go Long Mule shine the brightest: The gruff vocal roar compliments the instrumental arrangement nicely. It’s a dancer, a rock ‘n’ roller, and Go Long Mule work better when they’re dealing with that rockier side of things rather than with the folk side. Opening track “The Three Wives”, beginning with a slow drum fill, a George Harrison-style guitar lick, and dirty chords, is one of the stronger tracks, too, but its verse, which carries the rock element, is much better than the indie-folk chorus. In that sense, you can get everything you need to know from the first track: When the music is slightly edgier, a bit sleazier, Go Long Mule really works. Unfortunately, the stuff that’s in the folk vein is tired. If bands like Noah and the Whale are getting annoying now, then more of the same from other bands isn’t going to excite many people.

Still, this is an encouraging debut that also sounds at times like The Coral, and if Go Long Mule pushes that dirtier element of their composition and produces more tracks like “Ghosts”, then they might be onto something. Definitely one to keep an ear on, and it’s worth a few listens now, too.