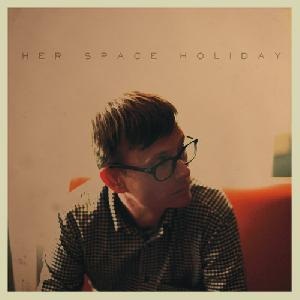 With confessional songs like “The Luxury of Loneliness” and “Home Is Where You Hang Yourself”, Her Space Holiday has always been very much Marc Bianchi’s cathartic solo project. Naturally, then, the first song on his project-titled LP opens with “She tells me that time/Will heal all our wounds/She shows me the scar/Where the arrow went through.” But the ensuing cacophony of voices, drum crashes (courtesy of Bianchi’s former Indian Summer bandmate, Eyad Kaileh), flutes, violins, and horns seems uncharacteristic, to say the least. Despite the plethora of guest artists and novel sounds, Her Space Holiday reveals the growing pains of Bianchi evolving his breathy, depressive lyrics and minimalist synthetic touches into something more uplifting.

Certain effects, like the tiptoeing guitar strums and triangle licks on “Shonanoka”, come across as endearing, while others fall flat. When Bianchi and the classroom choir, which includes Mice Parade’s Caroline Lufkin and Love Like Fire’s Ann Yu, sing, “And we all are forever wanting/And we all are forever getting/And we all are all of the above,” it doesn’t come across as believable. Instead, it sounds contrived, especially since Bianchi later wonders why he’s still alive on the dirge-like “Death of a Writer”. He’s at his most ingenuous sticking to the slow, sad aesthetic established on older material. The perfect example would be the violins and light drum brushes on “Death”, which emphasize Bianchi’s delicate voice when he sings, “I’m wide awake.”

Her Space Holiday doesn’t hit its stride until “The Candle Jumped Over the Spoon”, when Bianchi’s chorus sounds chilling instead of irritating, especially backed by accordions and backgrounded Twilight Zone wails. On the gratuitously titled but arresting “The Bullet, the Battle, the Trigger, the Barrel, and Me”, Bianchi earns the Conor Oberst comparison, musically if not lyrically, with his forlorn voice and a simple acoustic guitar eventually building to a rousing, hand-clapping chorus. The last waltz, “In the Time it Takes for the Lights to Change”, elegantly ends the album. Even the slightly off-key, multi-part harmonies demand you grab a partner.

Essential Tracks: “The Bullet, the Battle, the Trigger, the Barrel, and Me”, “The Candle Jumped Over the Spoon”