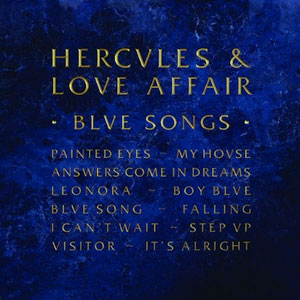 Though it came out all the way back in January, over in England, Hercules and Love Affair‘s newest long-player, Blue Songs, is finally getting an official release stateside, complete with a trio of bonus tracks and a handful of remixes. While their 2008 self-titled debut was well-lauded for its early adoption of the then about to break disco revival, the shtick has come to wear a bit thin, and the new crop of vocal collaborators just isn’t up to the snuff of the last. Replacing the likes of Antony with Bloc Party’s Kele Okereke, flatly put, is a step in the wrong direction for such a dramatic, house-indebted group.

Highlights on the hit-or-miss disc come in the form of production, more often than not, as on the lead single, “My House”. Despite the tragically 80’s sorta-rapping backing vocals and unbelievably over-repeated, terribly pun-y hook (“my house is in order”), the surprisingly gritty percussive stabs, polyrhythmic trance, and chiming synths easily prod a toe-tap or two. On the other hand, the halfhearted, unsure quality of Okereke’s statement on “Step Up” (“Baby, you might just be like this/maybe this might be who you are”) is bland enough to mean almost nothing, burying the relatively funky beat behind indistinction.

While die-hard U.S. fans will undoubtedly have found their way to a copy of Blue Songs, the remixes and bonus tracks here are worth at least a listen. A cover of The xx’s “Shelter” is undeniably fun, and the remixes are perfect fodder for a dance party, particularly the Tensnake remix of “My House”. But, together, even a few shiny remixes can’t save a floundering sophomore album like this one.