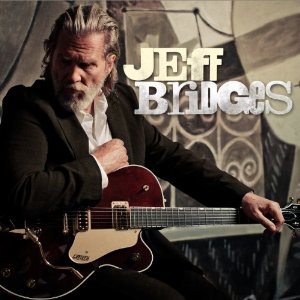 Yes, it’s that Jeff Bridges. The dude that played The Dude. However, for this album, it’s more important to recall his role as Bad Blake in the film that earned him his first Academy Award a couple years back, 2009’s Crazy Heart. Bridges draws out the country singer within once more for this team-up with uber-producer T-Bone Burnett. It’s the guy’s first album, and with Burnett’s assistance, it sure sounds purty. But does it stand up against the Hank Williams or Steve Earles of the world? In a word, no. Fortunately, there are many more words out there to pick and choose from…

Any of these songs could have fit onto the Crazy Heart soundtrack; Burnett was the music supervisor for that film, after all. The best of the bunch is the opening number, “What a Little Bit of Love Can Do”. It’s got a great sing-along quality and a honky-tonk sway to it, but it serves as a false indicator of what follows. Not one other song picks up the pace. More often than not they range from slow and middling (the Bridges-penned “Falling Short”) to, well, slow and middling (the aptly titled “Slow Boat”).

Not all of the slow-movers are duds. Roseanne Cash does offer lovely harmonies throughout the record, none more impressive than on the drenched-in-slide-guitar “Nothing Yet”. The piano-tinkling of “Blue Car” sounds as though it drove out of the rockabilly era. Burnett’s production is impressive, as always, with the percussion always popping up a little louder when necessary along with those gorgeous lap-steel processions. Bridges’ voice and guitar playing are also serviceable, but the lack of variety causes the album to fall short of becoming recommendable. Now that his self-titled debut has been released to the masses, perhaps he can deliver that sequel to Starman. SPOILER ALERT: Whatever happened to the baby?

Essential Tracks: “What a Little Bit of Love Can Do”, “Nothing Yet”, “Blue Car”