Mister Heavenly – Out of Love 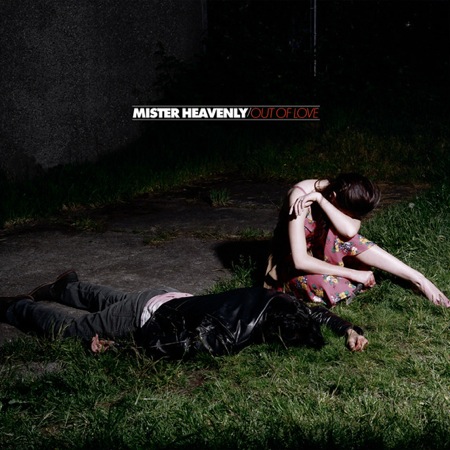 Years ago (and we’re talking like four-five years ago), Man Man frontman Honus Honus expressed that he would one day like to work with The Unicorns/Islands mastermind Nick Thorburn. In the months and years that followed, they collaborated here and there and revealed that what they were cooking up was to be called “Doom-Wop.” And with the addition of the percussive expertise of Joe Plummer (The Shins, Modest Mouse), they had themselves a band. Beginning a supergroup side project is one thing. But creating a completely new genre? Lofty, to say the least, and very intriguing.

After a brief tour to showcase their work in a live setting, Mister Heavenly took to the studio to create what would eventually become Out of Love.

Back in 2004, a dear friend of mine played me a track from The Unicorns’ Who Will Cut Our Hair When We’re Gone. I was smitten. The lo-fi recording, the pop sensibility, and the vocal stylings of the unsung indie hero Nick Thorburn were enough to get me addicted. So, it saddened me greatly when they announced their disbandment, but there was hope on the horizon: Nick T’s next project, Islands, the only one of his projects to have soldiered on with any sort of permanence.

His mild success with Islands has never been quite enough, though, and Thorburn has tried his hand just about everywhere else to find the exact project he’s looking for. In addition to the two aforementioned bands and having a solo career under his belt, he’s been the primary leader of a host of other bands: Human Highway, Reefer, the short-lived Th’ Corn Gangg, and the even shorter-lived Juiced Elfers. Unfortunately, despite his best efforts, he never found it. And it’s with great remorse that I say, the involvement of two very talented musicians (and one Michael Cera) notwithstanding, Mister Heavenly will fall alongside that long list of failed side projects.

The album is not enough to merit much else. While extremely listenable, Out of Love is, at its very best, a very fun experiment. The simplicity of musicianship and emotional lyricism of doo-wop are combined with the morbidity of Thorburn and Honus’s pop songwriting to complete the desired “doom-wop” effect.  And it’s in that same songwriting that this album soars. Without a doubt, the dynamic of Thorburn vocals v. Honus vocals is the most intriguing aspect of the record.

The juxtaposition of their vastly different singing styles is more than fascinating. In fact, it’s actually utterly enthralling at times. You’ll find yourself being lulled in by Thorburn’s smooth, pleasant voice only to be backhanded by Honus’s signature rasp. On the album opener, “Bronx Sniper”, Thorburn croons, “No one gets out of here alive/In the melee there are many ways to cry/Who knows where the gunshots are coming from?/Those who’ve been picked off aren’t saying much,” only to be immediately followed by Honus’s gravelly counter: “And I shot you down/You never had a chance in hell/And I shot you down/And I felt no remorse ‘cause/This heart’s a stranger, and you’ll love it ‘cause it’s dangerous like yours.” The dynamic begins to become something you learn to look forward to as the album progresses. They feed off one another in such a way that it keeps every song (well, almost every song) interesting from start to finish. It’s very much a “what on earth are they going to do next?” method of listening.

That said, the album on the whole comes off as a bit of a sideshow, an afterthought to the careers of three great musicians (and a great Paulie Bleeker). There are the occasional perfect moments that make you forget that this is all just a side project, but far more common are the tracks that remind you that you’re listening to a footnote of some other great projects.

At the end of the day, Mister Heavenly will go down as a fun side project for Honus Honus and Joe Plummer to add to their respective repertoires and as just another notch on Nick Thorburn’s proverbial indie bedpost, albeit a good notch. Out of Love is a fun listen, but it doesn’t go much deeper than that.