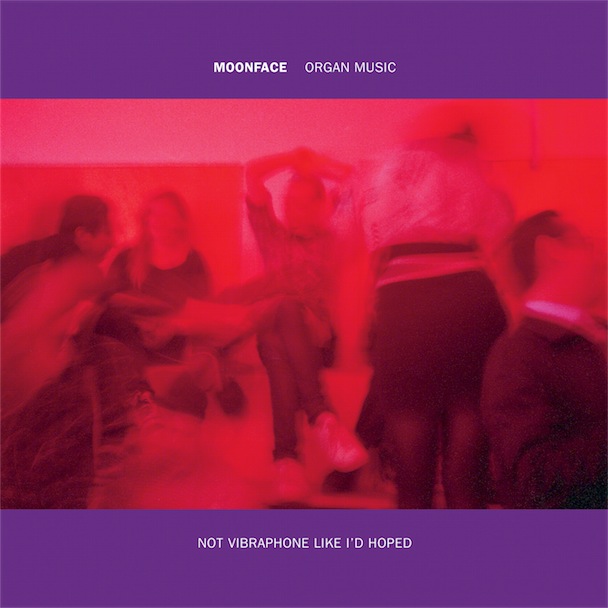 Guess who’s back, back again. Spencer is back. Tell a friend. Seriously, though, tell a friend. They might not know one of Wolf Parade’s lead singers has a new record out. It’s hard to keep track of this shit.

Spencer Krug is indeed back for more, and his absurdly and descriptively titled Organ Music Not Vibraphone Like I’d Hoped follows 2010’s Dreamland EP: Marimba and Shit-drums as one of the most unambiguously titled records in recent memory (Norm Macdonald’s Me Doing Standup coming in at close third). But the title of Spencer Krug’s latest auditory endeavor says two very important things about Krug: He’s brutally honest, and in turn, he is brutally true to his instincts.

Not only does Krug tell us, deadpan, exactly what he’s up to on the record before we can even wager a guess, but he also conveys something even more revealing: He isn’t in control. No, Krug’s body is merely a vehicle for the prolific, highly creative, and always intriguing artistic spirit contained within. Here, Krug had hoped to make a record of vibraphone music, but alas, his possessed Canadian frame has churned out an album of organ music. “Oh well, maybe next time, vibraphone,” Krug probably mumbled to himself after he scribbled the title onto the first CD-R of demos. Maybe next time.

Spencer Krug might be trying to be funny, but he’s also letting us in on something, explaining to us that he doesn’t really make the decisions around here; his music is the kind that almost literally spills out from his skull. It would account for his cryptic, frenzied lyrics, his frazzled delivery, and his countless groups, projects, and endeavors (Wolf Parade, Sunset Rubdown, Frog Eyes, Moonface, Swan Lake, etc.). Hell, my little fingers get tired just typing them all out. I can’t imagine how exhausted Krug gets writing, performing, and being a part of so many different ventures. Maybe we should relieve him of some duties and start brainstorming names for his next one; he’s running out of animal/nature combinations! Bashful Badger, anyone?

But his admittance might also account for why Krug would make such an unassuming record of exercises instead of fleshing out a perfect batch of new material. He’s simply got to get it out of him, so he can move onto the next thing on the list. Sometimes that means just recording and releasing quickly, like what probably occurred here.

With the latest from Moonface, Krug might not be as tired as usual. He’s not really working too hard. Though his lyrics still reveal the same somewhat troubled, fascinated, inquisitive, frustrated, self-aware, and bewildered soul as always, the music itself is pretty bare bones. The fairly basic songs found on the latest from the Wolf Parade co-pilot aren’t as fully realized as most of Krug’s work. These five tracks have enough nuggets of lyrical insanity, enough hypnotic keyboard works, and enough danceable rhythms to tide us over until next time, but the record does feel more like a collection of sketches than a full-fledged album. These things almost sound like demos for Sunset Rubdown songs, the skeletal map of a record that could eventually turn out all right.

Seemingly deliberately so, and as the title suggests, every single song has the same key elements: a cheap, 8-bit bleeping drumkit backtrack, some swirling, but hypnogogic organs, a little synth, and, of course, a croaking Krug (somewhere between a bewildered David Byrne and a Low-era David Bowie–guess he’s fond of those initials). Things build into semi-entrancing layers of synthesized sounds, but nothing really reaches the level of quality Krug usually exhibits with Sunset Rubdown or Wolf Parade. It all just kind of muddles together, and if not for Krug’s signature delivery or impeccable way with words, it wouldn’t have much going for it.

Opener “Return to the Violence of the Ocean Floor” begins the record with an immediate venture into Krug’s cerebral circuitry and a lyric that holds a candle to any other of Krug’s opening lines. As usual, he brings us inside his mind right away, wasting little time. “I’ve got a spirit,” he exhales, bringing to mind Ian Curtis only ever so slightly, “made out of sand/ sometimes it slips through my fingers/back onto the beach/in some kind of lust/to return to the violence/of the ocean floor.” It’s a mouthful, and you really have to think about it, so I guess Krug is still doing his job pretty well. But the incessant backtrack certainly grows tiresome, and not even his arpeggiated fingerplay can really make these particular sounds all that great. Krug has made a decision to stick with one aesthetic, one set of textures, for the record’s duration, and it yields some pretty nondescript results.

“Whale Song”, for instance, has all the melodic interplay of a Wolf Parade song, but with such similar textures creating those interweaving melodies, it all melds into one kind of mass of drab. The keyboard skills, the melodic complexity, it meshes together and ultimately loses much of its beauty.

There are dozens of lyrical gems, though: “Leave the revolution to the revolutionaries,” “Talking Heads make me miss my friends,” “I hear you hate it just based on your principles now,” and “So Peter’s leaving town, who even does that anymore?”  This is the kind of Krug that lets his convoluted lyrical themes take precedent over all else, the guy muttering each thought like a mad scientist. But you won’t find any pop gems here. Krug will have you scanning his dense poetry, but as far as instrumentation and shear vocal melody go, Organ Music is underwhelming.

It seems that Krug has reserved the Moonface label for his least ambitious experiments; it’s a place where he can exercise his most immediate urges. Kruggies (what I’m calling his followers) shouldn’t neglect this set of tracks, but those unfamiliar with Krug’s other bands shouldn’t start here, either. This is Krug’s sketch pad, and though it’s fun for some folks to take a look at his scribbles, most just want a fully realized painting. Give the guy a break, though. He certainly deserves one.