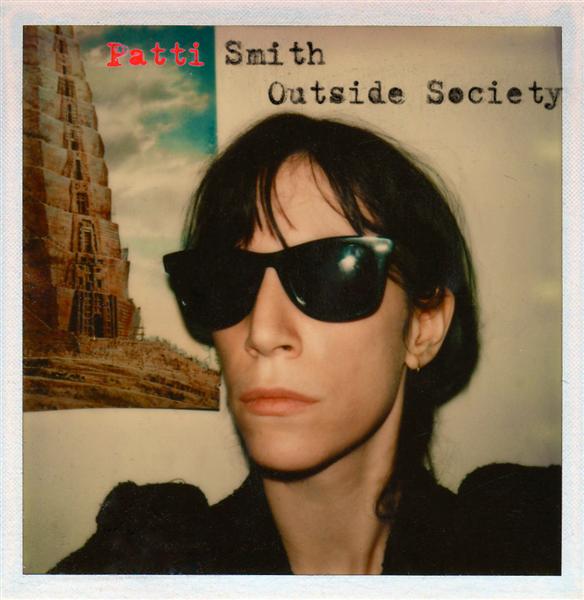 While Patti Smith‘s career has already gotten a sort of retrospective treatment (2002’s double-disc collection, Land (1975-2002)), this year’s Outside Society accomplishes something totally different. While Land was sprawling, epic, able to cover so many distinct moments in the punk poet’s career, it remained a clunky listen, one where it seemed almost more logical to pick and choose through the package, coming across longtime favorites and lesser known tracks in turn. On the other hand, Outside Society is infinitely more streamlined, a fluid listen that easily commands an a-to-z listen, as well as your full attention for some serious thought.

After the publication and widespread success of last year’s Just Kids, Smith’s National Book Award for Non-Fiction-winning memoir of her life with late photographer Robert Mapplethorpe, it seems as if a whole new crowd of people needs a full introduction to Smith’s work. And, rather than capturing the most important songs, or even every song with emotional power, to encapsulate Smith’s career, Outside Society is the definition of introduction, a welcoming, exciting collection that could lead to a listen to Land later on.

Readers of Just Kids brought into the Smith musical fold will immediately notice an intense connection between Smith’s music and the book’s moving ebb and flow, its gritty, tragic beauty and its vivid imagery. The opening track to Outside Society, appropriately, is her dominant version of Van Morrison’s “Gloria”, originally released by Smith on her seminal debut, Horses. Memorably echoing both Smith’s coming up in the early stages of the punk movement and her fascination by dark French poetry (Rimbaud, most notably), Smith’s version begins with the line “Jesus died for somebody’s sins/but not mine,” a sneer audibly slashed across her face.

“Free Money” may be the most readily connectable song between Just Kids‘ tales of Smith and Mapplethorpe’s effort to scrape by on nearly nothing. The opening verse (“Every night before I go to sleep/Find a ticket, win a lottery/Scoop the pearls up from the sea/Cash them in and buy you all the things you need”) aches with passion, a whirlwind of tense, beautiful energy. Smith’s songs act as poetic encapsulations of the long-form anecdotes she tells in the book. Now, coming at these songs from the book’s forced perspective, the already limitless depths of Smith’s poetic vision are plumbed even further, the familiarity doubled in on itself and highlighted like a favorite passage in a dog-eared novel.

But, that’s not to say that enjoyment of or power found in Outside Society depends on familiarity, either with the memoir or Smith’s career. The raw power of “Ain’t It Strange” aims to capture the drugged-out Max’s Kansas City scene in its tricky, rough-edged madness. The centered hook of “True, true, who are you?/Who, who am I ?” latches immediately to the mind, the surreal images swirling around it forced into a smoky haze. The questions continue on “Pissing in a River”, Smith wondering aloud about both the meaning of love and its possible salvation of existence.

The rest of the collection spins out like spokes on a wheel, each song inching closer towards the present, finding Smith’s music more refined and less punk-edged but her imagery and lyrics just as fractured, haunting, and beautiful. Later on, the Bruce Springsteen-penned “Because the Night” shivers with physical energy, while “So You Want to Be (A Rock ‘n’ Roll Star)” unfolds like a step-by-step narrative of “the life.” Early in the collection, “Rock N Roll Nigger”, from which the album takes its name, smashes like a ton of bricks, Smith’s attempts at post-raciality and her insights on the tramp-like nature of the artist a bitter, difficult pill to swallow but a powerful one nonetheless.

Late in the disc, Smith’s own nostalgia catches up with her. “1959” begins with her demanding that you “Let [her] tell you a story,” its complicated history unfolding in fits and spurts. Her version of “Smells Like Teen Spirit” pulses with a manic, insane, Appalachian energy, Smith sputtering out those familiar lines in such a way that they sound like they’ve never been sung before. And that, in the end, is the greatest power that Smith has. She does things in an iconoclastic, singularly powerful way. She is an artist that defines edge, pulsing with an energy that no other musician could duplicate, delivering images and lines that no one else would have imagined.

Essential Tracks: “Free Money”, “Because the Night”  “Pissing in a River”