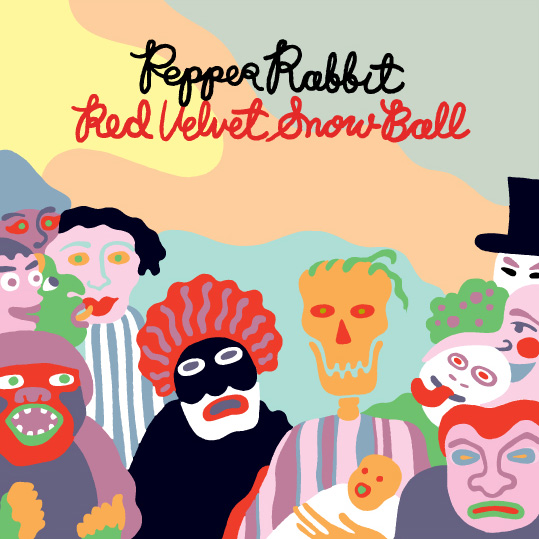 “I want it all/And you will know my name, dear Allison,” Xander Singh triumphantly sings atop a bed of swirling psychedelia and pulsating keys on “Allison”, a punchy track from Pepper Rabbit‘s sophomore LP, Red Velvet Snow Ball. Well, with a surprisingly confident vocal performance and a taste for all things whimsical, not only will Allison know his name, but, inevitably and imminently, the world of indie pop music won’t be able to avoid it. While the Los Angeles by-way-of New Orleans duo of Xander Singh and Luc Laurent’s 2010 debut, Beauregard, was a commendable demonstration of enchanting-yet-haunting, atmospheric pop, Red Velvet Snow Ball is not only an emphatic declaration of who Pepper Rabbit has evolved into as a band but also a jubilant collection of songs whose immaculate composition and undeniable charm demand, and deserve, attention.

It’s nearly impossible to discuss Pepper Rabbit’s music without using the word lush, as their soundscapes complete with seemingly dozens of layers really know how to entrance a listener. Beauregard‘s “Red Wine” and “Snowalker” epitomized this, combining innumerable instruments into a swirl of divine atmospherics. That incredibly rich depth makes a happy return as a cornerstone of Red Velvet, but Singh and Laurent up the ante–in both the number of instruments and a fresh, adventurous approach to the sound. Singh took it upon himself to learn a slew of instruments through self-instruction and YouTube videos, and the effort allowed each track of Red Velvet to take its own course, each featuring a different combination of synths, ukuleles, horns, and so forth. It’s never excessive, though, as Singh and Laurent make sure to achieve a perfect balance in the instrument mixing: While spunky single “Rose Mary Stretch”‘s percussion and acoustic strumming ground an explosion of carnival-esque whimsy on the chorus, “In Search of Simon Burch”‘s woozy synths take its respective spotlight.

Although the most audible change between Beauregard and Red Velvet is the newfound immediacy of the instrumentation and the explosive collaborative spirit, Singh’s refreshingly strong vocal performance is equally as important. His demeanor is notably more confident, the new prowess allowing tracks such as standout “The Annexation of Puerto Rico” that feature soaring, prominent vocals to work. He isn’t hiding behind layer upon layer of synths and swirls, and while his voice is not the strongest, Singh’s wails are likable and human. Squeals on “Rose Mary Stretch” and delicate harmonies on “The Ballad of Alessandro Moreschi” better what were already compelling, textured songs. Lyrically, the content leans toward the dark and haunting, discussing murder and doomed, mundane small-town futures. It’s an interesting contrast to the levity and grace of the music but ultimately adds weight as complex as the music it accompanies.

Red Velvet Snow Ball comes to a close with “Tiny Fingers”, a perfect summation of everything the album and Pepper Rabbit bring to the table. Beauregard‘s signature clarinet makes a subtle return, intricate layering of ukulele and warbled synths build upon themselves, and Singh delivers his phrases and cascading “ahhs” with ease. It’s a beautiful exercise in their now trademark brand of folksy, psychedelic pop. Midway through, though, the song drops to nothing but a bass line and swells into a stunning combination of acoustic strumming, Singh nearly screaming, and screeching horns. Although brief, the shot of adrenaline proves to be one of the album’s best moments and emphatically shows one last time that Pepper Rabbit is neither predictable nor afraid of change, and that Red Velvet Snow Ball is just the beginning. As “Tiny Fingers” and its drums fade out, it’s impossible to think of this band doing anything of the sort in the foreseeable future.