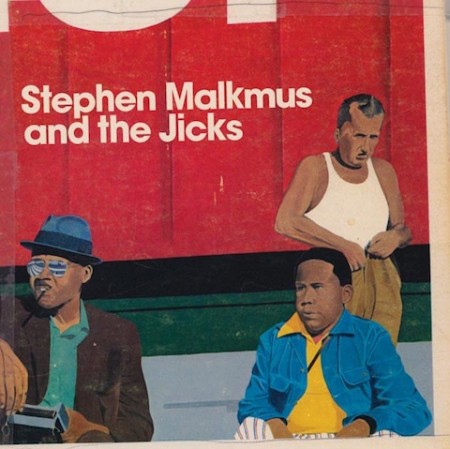 Following the breakup of Pavement, frontman Stephen Malkmus supplemented his name with an ampersand and plurally titled backing band on more or less all of his subsequent releases, a practice long adopted by countless classic rock musicians (Neil Young & Crazy Horse, Buddy Holly & The Crickets, etc.). This throwback band name, Stephen Malkmus & The Jicks, seems most appropriate on their latest album, Mirror Traffic, the band’s fifth record (give or take a few contradictory album labelings) and the one most rooted in traditional, classic rock songwriting. The trend was previously most apparent on their last release, 2008’s Real Emotional Trash, which all but abandoned the squelching synthesizers and sci-fi guitar of 2005’s Face the Truth in favor of Sabbath-esque jams such as “Dragonfly Pie” and melancholy meditations like “We Can’t Help You”, which (like many nostalgic homages) recalled “The Weight” by The Band.

But Trash, while still a great record, felt a tad forced, as if SM and (or &) company was trying to mold each song into the style of a different musician from the 1970s. Mirror Traffic, however, finds them easing into their groove, seamlessly melding loose, almost jazzy musicianship with Malkmus’s trademark demented wordplay and imagery. With production by Beck, one would expect the album to go in the opposite direction — amplifying the songs’ weird idiosyncrasies instead of streamlining them. But the collaboration between the original kings of “slacker rock” (a term that seems horrendously outdated given the musicians’ outputs) has resulted in Malkmus’s most accessible album to date — radio-ready bliss that will probably never be played on the radio.

“I caught you streaking in your Birkenstocks,” Malkmus sings in the opening verse of first track “Tigers”, a tale of divided love told over playful guitar noodling and falsetto. The juxtaposition of hook-laden melody and bizarre storytelling sinks into the ears from the get-go, with the album continuing its catch with second cut “No One Is (As I Are Be)”. An autumnal acoustic guitar plucks over Joanna Bolme’s standup bass and what sounds like a French horn and twinkling piano halfway through the song, making for a tune that’s astonishingly elegant. Ex-Sleater Kinney drummer (and now ex-Jicks drummer) Janet Weiss is majestically subdued here, turning down the thunderous stomping heard in Quasi for a freewheeling style more reminiscent of a session drummer.

“No One Is (As I Are Be)”‘s beauty snaps into guitar hero bombast on the following track and first single “Senator”, where Malkmus heaps Thin Lizzy crunch over lyrics explaining why politicians want blow jobs (because “what everyone wants is a blow job”), interluding the chugging momentum with an especially bendy solo. Its fluctuating pace and whimsical socio-perversity make it the most Pavement-esque of all the songs and an addicting anti-hit of the summer.

Some listeners may gulp at the 16-song track listing, but Mirror Traffic contains a surprisingly scant amount of filler. “Share the Red”‘s carefree pessimism is complimented by a constantly climbing bass line, and “Stick Figures in Love”, with its urgent drum fills, bittersweet guitar syncopation, and lyrics of “frozen enemies” and “tokens of my voice,” ranks among Malkmus’s most beautiful work. The album’s only lull arrives in closing track “Gorgous George”, which, in a strange alliterated echo of Real Emotional Trash closer “Wicked Wanda”, rambles on without going anywhere. It’s not a particularly bad song, but it lacks the hook and bittersweet wallop of the rest of the album. It may have worked better if placed in the middle of the record as a carefree centerpiece, switched out with “Stick Figures in Love” or the celebratory surf punk of “Tune Grief”.

But that’s a small complaint for an album that captures one of indie rock’s longstanding heroes still at the top of his game. Sure, there will always be fans who long for Pavement, but they should rejoice in the fact that Malkmus has aged gracefully, retaining his humor, wit, and one-of-a-kind storytelling while rounding out the introspection of works such as Terror Twilight and tightening the structure of albums like Slanted and Enchanted. And although his lack of structure is part of what drew listeners to the songs in the first place, we all have to grow up sometime.