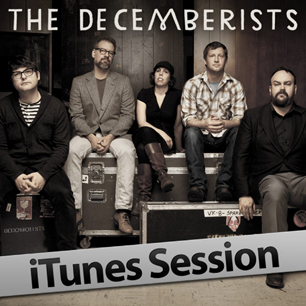 Following the bloated, rock opera awesomeness of 2009’s The Hazards of Love with as tame and even-tempered a record as this year’s The King Is Dead betrayed a conscious retraction on The Decemberists‘ part. They and their ambitions grew exponentially with each album, and just when it seemed like they couldn’t possibly make music any bigger or (in what seems to be only my opinion) better, they simply didn’t, opting instead for a much more amiable palette of instruments, lyrics, and ideas. The King Is Dead was far from a bad album, but it was certainly a disappointment to see Colin Meloy and co. abandon ship as indie rock’s resident high-flown thespians.

On the iTunes Sessions, the Decemberists tackle a variety of tracks from various points in their career, along with a couple of fine covers. Among them is “Hey, That’s No Way to Say Goodbye” off of Leonard Cohen’s seminal, kinda-self-titled 1967 debut, which proves a surprisingly natural fit for Meloy’s nasal vocals, especially given the woodsy fiddle they add to the original’s spare, acoustic backing. Elsewhere, the band reprises several of King‘s higher points–the rousing “This Is Why We Fight” and “June Hymn” among them–to stirring effect. Still, the arrangements and performances remain too close to the recorded takes to warrant more than a couple of listens. The only other high point is the EP’s final track and only other cover, a rework of the Fruit Bats’ “When U Love Somebody”, which plays like a country rave-up, offering a peek at The Decemberists’ wild side.