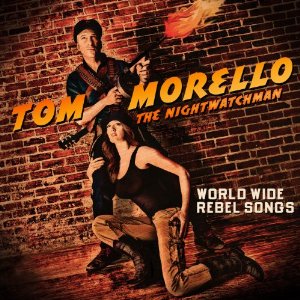 Remember when Garth Brooks created his alter ego, Chris Gaines? That is an example of how bad and hilarious a stunt like that can be. When Tom Morello first created The Nightwatchman, it was just an outlet for his political views. Since then, he has created an angry, passionate character, one confused about war, and not shy about sharing his views on the subject. Morello can speak volumes onstage with just his guitar in some of rock’s biggest bands (Rage Against the Machine, Audioslave), but to hear his voice and his passionate take on the world via World Wide Rebel Songs is truly moving.

The Nightwatchman’s dark, deep voice can be startling at times, largely due to its undeniable constance. Most singers and front men alter their vocal range all over the board, but not Morello. He stays calm and rough, all at once. The goal here is not to sound great, it’s for the words to be great (and they are). Primarily relying on just acoustic guitar, one of the most iconic guitarists of his generation tells frightening, detailed stories of revolution, despair, and triumph.

The heavily worded “Stray Bullets” speaks of a bitter soldier in combat: “Why the fuck we’re even here/I’ll never know/Me and Steve we went out walking/A few of us have started talking/now we’ve got a mission of our own.” Later tracks are notably varied. The chaotic drug tale “The Dogs of Tijuana”, the somber album closer “God Help Us All”, and the upbeat and harmonica-friendly “World Wide Rebel Songs” and “Speak and Make Lightning” altogether provide a wide spectrum of sounds that keep this album from tiring.

The main thing to take away from World Wide Rebel Songs is the message. Each song tells a story or conveys a feeling that captivates the listener. From start to finish, you are in Morello’s world. It can be dark. It can be cheery. But most of all, it’s his.

Essential Tracks: “Save the Hammer for the Man”, “Stray Bullets”, and “God Help Us All”