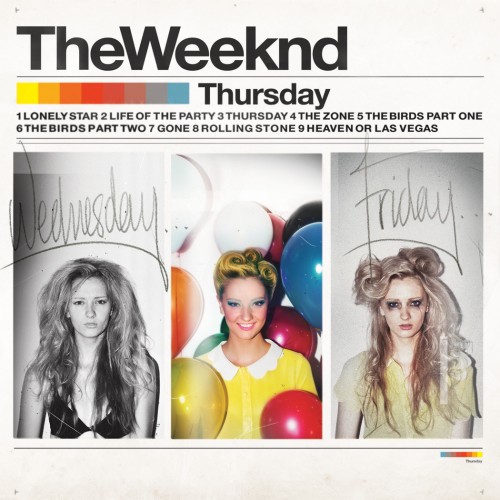 The Weeknd plays a bit like a Bret Easton Ellis novel reads, giving off a feeling that’s somewhere between hopelessness and apathy. Dealing with essentially the same ideas that appeared on their previous album (drug-abuse, jarring lust, lack of conscience, etc.), Thursday almost dares your dark side to indulge in its beautiful bleakness in an “I can’t believe you’re enjoying this, you twisted bastard” sort of way. Look no further than this line from the slow-burning “The Zone”: “So let me sip this slow/I’ll give you what you called for/just let me get in my zone/I’ll be making love to her through you/so let me keep my eyes closed.”

It’s that raw numbness toward such thematic elements that makes this album and its precursor so utterly enthralling. By way of nature, we as human beings tend to be fascinated with the forbidden and the gluttonous. So, when it’s presented in such a pretty, little package, it’s almost impossible to resist. That isn’t to say this album is a complete success; it has its minor pitfalls here and there, but they’re all in places that are obviously trying to compensate for the immense amount of shock value that this album would never have access to when compared to its jaw-dropping, straight-out-of-left-field predecessor, House of Balloons.

For instance, the quality of the production on this album is unmatched compared to that of HoB, paying an inordinate amount of attention to every detail of every bar of every song. Abel Tesfaye (aka The Weeknd) takes a backseat to the production at times, which is a well-intended move that actually works in a few select places but ultimately acts as a curse. One begins to come to the realization that maybe Tesfaye should never take a backseat to anything or anyone. His voice is far too good to be downplayed by musicianship, or anything else for that matter (not even a superb appearance by Weeknd fanboy Drake), and the fact that his voice is not the centerpiece of this album is the only reason Thursday will never be the album its elder brother was.

It’s not all bad news, though, and the album is a success by and large. When the tight production and the sheer talent of Tesfaye meet in the middle (“Life of the Party”, “The Zone”, “Gone”), it creates a new kind of bliss, one that was absent on the previous album. This is probably exactly what they were going for, overall. Rather than cranking out the same album again, they experimented sonically, which is both admirable and somewhat effective. But the absolute best moments on the album remain the moments when The Weeknd stops the show with his impeccable vocals. The amount of control this kid has over his voice is no joke. He has mastered his upper register to the point of perfection; all the way to the point that when he pushes it to the limit, it’s all eyes on Abel, no-holds-barred. When he dabbles in his falsetto during the conclusion of “The Birds Part 1”, he creates possibly the most captivating 35 seconds in music this calendar year.

Yet, despite the ridiculously high highs of this album, it fails to maintain a great pace throughout. It struggles back and forth between “good” and “great,” whereas its foregoer grabbed “great” by the balls on the first track and never let go. Regardless, the album is incredibly solid and even more successful when viewed in perspective. It received an estimated 180,000 downloads on its first day of being posted. Obviously, that is obscene for a self-released effort. It’s far from mere happenstance, though. Whether it’s his being in the right place at the right time (this year did begin as the year of James Blake and his post-dubstep cronies), or whether this kid has the sheer talent to bolster those kind of numbers is yet to be proven, but I submit that it’s a combination of the two, more so the latter. I guess we’ll all find out when the third and final part of the trilogy, Echoes of Silence, drops sometime this fall. Until then, we’ll all stay confusedly mesmerized with the enigmatic music box that is The Weeknd.