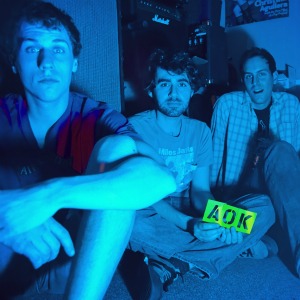 When I ask Chicago-based trio Geronimo! if the exclamation mark is entirely necessary, guitarist and vocalist Kelly Johnson responds, “I don’t think we ever regret using the exclamation point. I know I personally think it adds some pizzazz. There are a few other Geronimos out there, but we’re the only one that you read as a scream.” It fits the band’s articulated noise, which often includes Johnson or keyboardist and vocalist Ben Grigg yelling or (at the very least) rocking the expletive out. On slowly explosive “Battery Acid Moustache”, Grigg screams, “My baby’s got a fever!” against thickly electric call-and-response guitars that push and pull like the end of a relationship.

In fact, Geronimo!’s debut LP, Fuzzy Dreams, was recorded amidst the throes of ending relationships. Extracting himself from a painful breakup, Johnson brought his two childhood friends and band mates (including drummer Matt Schwerin) back to their hometown of Rockford, IL to record the album in Grigg’s divorced parents’ empty house. They set up their respective amps in different rooms and played their instruments in the same room together, resulting in each song’s organic climax and denouement as the band members riff off each other. Most of Geronimo!’s songs begin that way. As Johnson says, “I write a lot of parts on guitar, but most of the time everything changes once we start playing in practice. We sort of structure it on the fly.” You can hear it in tracks like “Table Legs”, which moves seamlessly from vitriolic hair-band shredding to Jim Morrison-esque murmuring to billowing synth pads and even trumpets. And that’s how almost every Geronimo! song, which average about seven or eight minutes in length, plays out.

The band has been compared to Fugazi, Dinosaur Jr., and Pavement, with leanings toward Explosions in the Sky. Of all the bands Geronimo! sounds like, Johnson says The Doors comparison is “a bit of a stretch.” But the distant, echoing vocals against a trance-like whisper of a melody on “Fill Me Up” beg to differ. The resemblance on that track in particular, and on Fuzzy Dreams’ quiet moments, is uncanny. Slightly psychedelic “Judgment Day” ends the album with organs and epic wa-wa horns while Johnson sings, “Judgment Day/And the fiery lakes/Are miles away/With you right by my side.” It’s a cutting double entendre for a breakup, suggesting either reconciliation or retribution depending on your perspective. And that, according to Johnson, is what their music is all about: “People hear what they hear based on their subjective palette, and that’s fine. I don’t care what we remind people of. I know what we sound like.”

Their distinctive, uncompromising sound caught the attention of Max Becker, a friend of the band and creator of Minneapolis blog Northern Outpost. He directed a music video for “Design Yourself a Heart”, the first single off Fuzzy Dreams. Fat, thrashing guitars wailing against a quickening drumbeat reminded the videographer of running water. So, in the video, the band members drip water as they run down alleys, ooze water while crawling along some tarmac, and creepily spit up water as though it were air. “It’s an abstract concept of drowning on dry land, whether that’s self-imposed or external is up to other people to decide,” Johnson explains.

The band just finished recording a second full-length. Tentative song titles (which sound more like Flight of the Conchords than the tracks on Fuzzy Dreams) include “You’ve Got a Dad in Rockford”, “The Wizard Is Rising”, “Me Likey”, “Why Did You Leave Me?”, and “Clown Feelings”. In the meantime, they’re releasing a series of four-track cassettes collectively named Buzz Yr Girlfriend. Geronimo! will be handing them out for free every three-to-six months during their live shows, with the added bonus of side B being whatever the tape was before Geronimo! taped over it. Some might get Johannes Brahms, for example. Be sure to catch one of their shows, and a free cassette, when they hit the road in October.