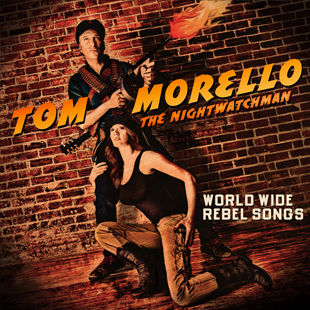 With Rage Against the Machine possibly in flux, axe man Tom Morello has once again turned to his solo career to drop all sorts of sonic insurrection. After signing with New West Records earlier this year, Morello will release his third album under The Nightwatchman moniker when World Wide Rebel Songs hits stores on August 30th.

The self-produced, 12-track effort is a change of pace from the usual acoustic offerings of past Nightwatchman albums, with the record featuring a full electric backing band called The Freedom Fighter Orchestra (comprised of Dave Gibbs on bass, Carl Restivo on guitar and piano, Chris Joyner on keyboard, and Eric Gardner on drums.) In describing the record, Morello states, “Troubled times call out for troubled songs. World Wide Rebel Songs is an album of rousing hopelessness and this time The Nightwatchman has brought along his electric guitar to tip the scales. I wanted to capture a vibe midway between Johnny Cash and Che Guevara, murder ballads and Molotov anthems.”

Our first taste of the album, available below for listening, is the Thin Lizzy-inspired arena rock anthem of “It Begins Tonight”. Just under that are the album’s tracklist and Morello’s upcoming tour dates, where he’ll support the likes of Incubus and Rise Against.

The Nightwatchman – “It Begins Tonight”