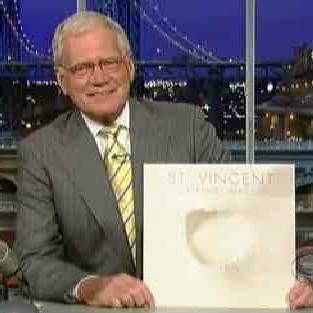 Bad news: We’re still two weeks away from St. Vincent‘s third LP, Strange Mercy. Good news: We’ve been spoiled by Annie Clark over the past week. Between one clever, opaque video and a collection of new songs debuted live, fans have little to whine about. (And, if you still are, just keep watching this clip again and again.) Wait, there’s more, though. To help soak up the partly flooded Big Apple, St. Vincent hit Late Show with David Letterman on Monday night to knock out new single, “Cruel” (via The Audio Perv).

Cloaked in black, and vaguely resembling a post-modern Lois Lane, Clark remained rather stoic throughout the cut, letting her hammer-and-nails distortion do the action, instead. Background singers? Sure. Those neon lights did the trick, too. When the yellows washed over the stage – right around that slightly sticky chorus – Clark’s smile materialized, her pearly whites slicing through each and every lyric. “Mm, hmm there you go,” Letterman recapped.