Astronautalis – This Is Our Science 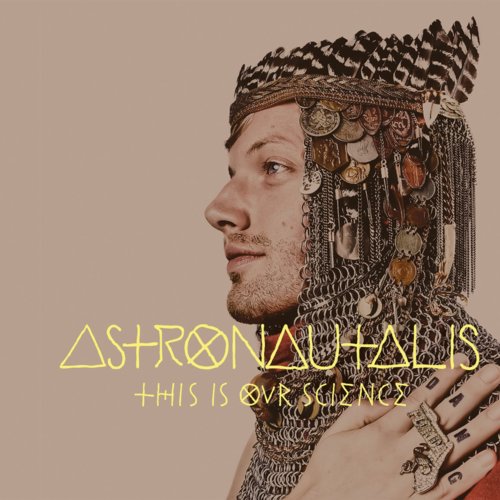 “There ain’t no magic in materials. Magic’s in our words.” – “Lift the Curse”

When it comes to Astronautalis, those lines are at the center of everything he does. The rapper has spent his career putting all his energy into his lyrics, and the music serves to deliver them. Minneapolis-based Charles Andrew Bothwell’s last full album was the incredible, experimental Pomegranate, and while that record was expansive and full of divergent genres and characters, This Is Our Science condenses the process into a tight 40 minutes of rhythm and revelations.

From the minute “The River, the Woods” arrives with a hi-hat flourish, Astronautalis kicks his performance into top gear and never lets up. Rapid-fire verses transition into a shouted chorus that could shred vocal chords. The synths, piano keys, and rhythm section blast through just as aggressively, adding to the tale of a sea captain losing control of his ship. With some wonderful imagery (“An anchor’s just a coffin nail/Waiting for that hammer drive”), it’s the most exhilarating opener he’s ever done. “Dimitri Mendeleev” has a similar delivery, though the tempo’s faster, and the keys are clearer.

This isn’t just Bothwell’s show, though. Instead, he invited a couple of friends to help him out on vocals. From the rap world comes Sims of hip-hop collective Doomtree on “Thomas Jefferson”. On that track, sharply bent guitar strings and drunken piano lines combine into a ramshackle chorus that fits with Astronautalis’ raw delivery. While Bothwell’s verse literally has the kinetic energy of a gun going off, Sims slows things down, saying less, but making the most out of his time. (“He would have loved this/But he had to die to give it/I melted down his musket/Turned it into a tool.”) Making an appearance from the rock side of the aisle on “Contrails” is Tegan Quinn of Tegan & Sara. Simply put, she goes with what she does best: creating fantastic vocal harmonies over indie guitar riffs.

Although this effort is streamlined, it doesn’t mean Bothwell’s lost his genre-busting touch. “Holy Water” turns Astronautalis into a mad preacher from the 1800s, singing about fire and brimstone. The ominous chorus of moans sounds like churchgoers crossing themselves as they follow his words. “Midday Moon” balloons into an electronic dirge that slithers along like the moon fading against the sun. Dedicated to Robert Nelson, who tried and failed to cryogenically freeze people to stave off death, the lyrics have a mix of hope and desperation that keep the melody moving, while also addressing the dark subject matter. “This is how they came to me one at a time,” Bothwell levels. “Pilgrims to my building on the cemetery grounds/All they wanted was an answer and I could never let ‘em down/I couldn’t promise them forever but I could buy a lot of time.”

While every song he’s written has been influenced by his own life and personality, Astronautalis seems to drop away any veils or masks in the album’s cathartic two-song finale. “Secrets on Our Lips” opens with a repeating synthesizer that props up Bothwell’s gentle vocals. When the whole band kicks in for the chorus, it transforms into a Springsteen-esque explosion of piano and bashed drums. Lines like “Her bottom lip was swollen from being pressed between my teeth” and “It’s not a bad life to live/making out all day/living off the food and drinks inside the vending machines” tackle the subject of love and lust in one of most descriptive and resonate ways of recent years.

If that track is the buildup, “Lift the Curse” is the grand send-off. Astronautalis takes on his life of a touring musician, seeming to speak directly to those who have supported him throughout the years: “So I keep singing you these spirituals/and pray it lifts the curse/it keeps me chasing ghosts and dreams/from funerals to birth/in reverse.” As that last line ends, strings swell gloriously, cutting through speakers like the sun does when it breaks over the horizon. It’s the type of song that can’t really be followed up. You have to break before listening to any other music, so you don’t interrupt the sense of peace and joy you get after this record ends.

Astronautalis recently said on his official site, “It wasn’t until I really started writing the album that I took time to sit back and reflect on this life lived without an anchor, and it was then that it became abundantly clear that home may never be a place for me. Home will be in my stories, my memories, and more than anything… my friends.” With all the lines, lyrics, and love he put into This Is Our Science, he’ll find a home in every city he visits on the road and a growing fan base of friends with whom he can share his stories.

Essential Tracks: “The River, The Woods”, “Holy Water”, and “Lift the Curse”