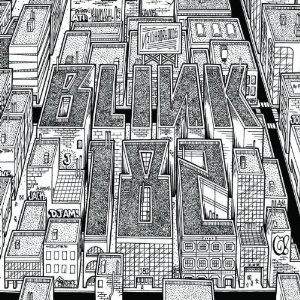 The adolescent juxtaposition was a strength as much as a signature. So, given the epic dramatics of their last studio release, it’s not a surprise that Neighborhoods is even doomier and gloomier than its predecessor. The band has seen their fair share of obstacles over the past eight years, from typical grievances like divorce to the tragic plane crash that nearly took Travis Barker’s life and indirectly led to the death of the band’s good friend DJ AM. It only makes sense that they’d amp up the pessimism and plunge into darkness, and much like Blink-182, that’s both the weakness and the strength of Neighborhoods. The weighty aesthetic makes the punky bombast all that more effective and fascinating but also tends to swallow it up in an ocean of melodrama.

Fortunately, the tracks that work work well. Opener “Ghost on the Dance Floor” makes wonderful use of the band’s clashing energies, kicking off with ’80s keyboard ambiance soon invaded by Tom DeLonge’s furious buzz saw guitar. It fades in slowly, then bursts into familiar full throttle with Barker’s precise snare and Hoppus’ full bass, teetering back and forth between seeps of synthesizers and perfected three-chord bliss. The trend continues on “Natives”, its rapid-fire offbeat strategically derailed by ethereal guitar and Hoppus’s haunting chorus, rife with romantic yearning and imagery of Jekyll and Hyde.

The record’s first misstep comes with third track and (confusingly) first single, “Up All Night”, which combines the bloated production of Angels & Airwaves with the snot-packed nag of Boxcar Racer, abruptly switching between crunchy guitar and an unfocused keyboard riff. Hoppus has always possessed a clearer vocal quality that seems better suited for the more serious stuff (DeLonge often sounds like he’s whining), but on “Up All Night”, he’s limited to the chorus and a couple of trade-off lines in the verses. Although having two vocalists continues to serve the band well, it’d be nice to hear Hoppus featured a bit more on Neighborhoods. His stripped-down “Heart’s All Gone” ranks among the best tracks on the record, blending the bare bones of three-piece instrumentation with lyrics that are simple yet mature. “This seemed so sweet at the start, but the start’s all wrong/you say you speak from your heart, but your heart’s all gone,” he belts. It’s a track that blends the best elements of Blink’s younger years with the weathered wisdom of their late 30s.

“Mh 4.18.2011” follows the same garage-hook formula with great success, as does DeLonge’s “Wishing Well”, making nice use of muted production flourishes interrupted by a popping chorus reminiscent of younger punkers Gaslight Anthem. Here, DeLonge’s lyrics rely on visuals instead of empty overstatements, crafting a sonic narrative of diving into a wishing well and eventually washing up on a jagged shore. It trumps overwrought sentiments such as, “All I hear are the many echoes of the darkest words you said,” found on earlier, sludgier cut “After Midnight”. The album closes in similar soap opera fashion with “Love Is Dangerous”. Saccharine keyboards float over a plodding chord progression and numbing echo effects, building nowhere to a chorus that does nothing but repeat the clunky title of the song.

The deluxe edition contains two additional tracks at the end: Barker’s cluttered soundscape “Fighting the Gravity” and DeLonge yawner “Even if She Falls”.  Along with “Snakecharmer”, which sounds like it was produced by Linkin Park, and an unnecessary interlude that leads into “Heart’s All Gone” (nearly stripping the song of everything that makes it good), the bonus tracks do little but inflate an already inflated album. With the 10-song version, the moments of brilliance (and there are many) are still able to shine through, giving hope that Blink could one day put out a record that perfectly marries their catchy energy with their more adult impulses.

Essential Tracks: “Ghost on the Dance Floor”, “Heart’s All Gone”, and “Natives”