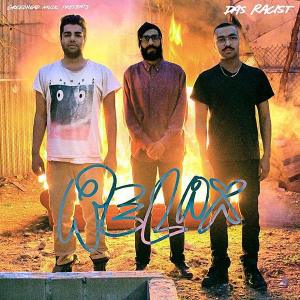 The myriad of ways to describe Das Racist and the mile-a-minute pop culture references, bizarre banger beats, and dizzying, clever rhymes on the rap trio’s new record, Relax, is overwhelming for even the most seasoned music writer. Its scope of content is broad, fast, and furious. Its subtext, context, content, and artist intent are all really slippery, for one, and it gets more so when you consider cultural, ethnic and racial cues. The Web 2.0 obscurity-fueled, meme-based culture and its ravenous appetite for everything current all the time is the trio’s central prism — or rather kaleidoscope — through which they see the world. It’s dizzying to take in.

Like Himanshu “Heems” Suri raps on Relax‘s rework of previous Shut Up, Dude mixtape track “Rainbow in the Dark”, “I’m an Internet thug.” It’s hard for anyone to get a handle on what that Internet thuggery is because Web-based cultures evolve so goddamn fast. But let’s try to sum Relax up: smart phone rap. I wouldn’t add this micro-genre name to the already lengthy and ridiculous list that critics have made if I didn’t think it summed up Das Racist’s approach to their music well. In a phrase, it’s knowing, tongue-in-cheek rap whose energy feeds off constant connectivity to the Internet: It’s accountable and hyper-aware.

And considering the frequent, quickly turned-around, and mostly undercooked efforts of this very niche micro-genre, Relax is Das Racist’s definitive album to date. It’s also a kick in the pants for the New York rap old guard. Perhaps that’s the group’s most accurate label– which speaks volumes about the state of NYC rap, and therefore rap in general. It’s turning into legacy music as we speak. Who’s left, you have to ask, from New York rap’s 1987 to ’97 Golden Age that still feels particularly relevant? It’s harder to come up with one than it was 10-15 years ago. Undeniably, things have fallen off.

Relax is the sound of New York rap circling its wagons trying to think of something fresh while Southern rappers, or at least non-New York ones, are eating their lunch 10 years strong, during (arguably) their own Golden Age. In light of that, here’s hoping Relax revitalizes NYC rap at a time when it needs it more than ever before.

The odds look good. The last time New York saw something as fresh, vibrant, and weird as Relax was Dipset circa 2003 or Company Flow circa 1997. (CoFlo’s El-P, by the way, shows up on another Relax mixtape rework, “Shut Up, Dude”.) Better comparisons for Relax may go all the way back to the ’80s with Def Jam-era Beastie Boys circa Licensed to Ill or De La Soul circa 3 Feet High and Rising.

Even The Ramones’ zeitgeist circa 1977 is telling for Das Racist, even though rap was still in its primordial house-party stage at that point. Like those four Jewish “Ramones” playing the roles of Italian greasers as stage personas, Suri, Victor Vazquez, and Ashok Kondabolu play the alter egos of Heems, Kool A.D., and Dap, respectively, in a trio that forms like Voltron on Relax (Kool A.D. moved to Queens from the San Francisco Bay Area, but whatevs). Like those fellow Queens residents, Das Racist has the brilliant lyrical gift of making intellectual, Manhattan-talk points by saying dumb shit, doing it with a be-easy, Queens swag.

The hook on Relax’s lead-off single “Michael Jackson” couldn’t be more “stupid,” but it also couldn’t fit the Manhattan wit/Queens swag profile detailed above any more perfectly. What is the difference, if any, between chants of “Now I wanna sniff some glue/now I wanna have something to do” and “Michael Jackson/A million dollars/You feel me?/Holla”? Maybe the different neighborhoods and eras they originated from, but that’s about it.

Maybe interpreting “Michael Jackson” and the bulk of Relax as something deep (a frenetic meditation on fame?) sounds ridiculous. Maybe the it isn’t supposed to mean anything. Maybe you should just party to it. Maybe the joke’s on the music press (i.e. this review) that hypes Das Racist as something “more than what it is.”

And what if the joke’s on us as listeners, too? What if Das Racist isn’t The Lonely Island-like joke rap outfit some insist? What if, at the same time, the trio isn’t just being funny? What if the dudes are actually making a point? Like Heems raps with Das Racist tour mates Danny Brown and Despot as a double entendre on Relax’s “Power,” one of its best tracks, “I don’t know why people think we give a fuck so often.”

“All art is performative, and all performance is art,” Kool A.D. said to the Village Voice in June 2009. “Existence is performance art. Everything is funny, and all jokes are serious.” No thought is more important to have in the forefront of your mind here. Maybe Relax is just a joke that’s on all of us, including Das Racist. Maybe we’re all in on it and maybe that’s okay. Maybe, in the spirit of the title of Relax, we should just crack open a beer, smoke a joint, and laugh at ourselves and at each other… together.

As aw-shucks as that interpretation of Relax seems, it does seem to be the overriding message of Das Racist through all of the irony, tough rap swag and tongue-in-cheek humor: human equality, cultural understanding and being good to one another. Relax is a pretty good step toward that.