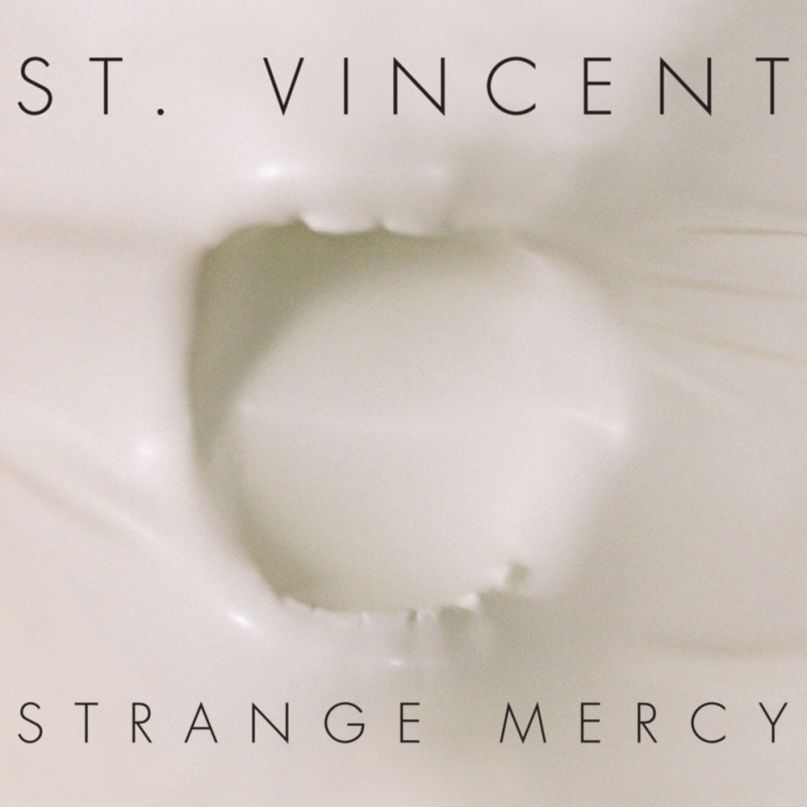 Describing Annie Clark’s work as St. Vincent comes down to a toss-up between cinematic and clever. Both in the studio and in her videos, Clark is captivating, expansive, and yet undemanding. She slyly earns your attention with bombastic hooks, witty turns of phrase, or by mentoring a kid who just got a merit badge for “mind sandwich” (all done together in the video for “Jesus Saves, I Spend”), and then she reels you in further. She convinces you to take another step closer to the difficult subjects she intends to work out. Many were drawn in by the title track of her debut, Marry Me, for its cute power, the smoky vocals, the pretty girl singing directly to you with stark emotion. But what sticks in the end are her clever twists (“Let’s do what Mary and Joseph did… without the kid”) and the huge scope of such a simple song.

2009’s Actor, then, was the next step, as if now that the debut got the audience on the hook, it was time to reel them in (but not too fast, instead lingeringly, assertively, masterfully). The flurries of horns and strings, jagged guitar riffs (of which Clark is an underrated genius, a master shredder), and distorted fairy tale themes upped the ante, and Clark’s lyrics grew even more personal, more chillingly effective. While the debut’s cover featured Clark straight-ahead, Actor found her a little closer to the lens, yet still gamely looking away. She was essentially challenging the line between life and art, baring her soul while also playfully looking away and calling herself an actor.

It’s telling, then, that the cover for her follow-up, Strange Mercy, simultaneously obscures Clark even further and offers a more intimate view. What is ostensibly a close-up of Clark’s mouth pressing through a nylon screen of some sort comes closer to the instrument that Clark uses most effectively to convey her intense, personal views, while also potentially silencing it. There’s a dangerous intimacy going on, a duality that Clark portrays just as well in her narratives.

Album opener “Chloe in the Afternoon” previews the changes in Clark’s pallet, her gasps for breath at the end of a few lines adding as much color as the woozy synths and expansive, fall leaf crunchy guitars. The flashes of noir-y solo guitar, the stuttered drumbeat, and Clark’s almost Bjork-y delivery all come together into a space-funk collision, in which vaguely sexualized lines like “Ring ring phone/send you home/find my heels/hear my hurt” ache menacingly. “Cruel” follows, more similar to Actor in its Cinderella orchestral treatments, but the plinking synths and galloping drums are vintage New Wave. Charging through the scene like a wild horse is Clark’s undeniable uber-fuzzed guitar, and her vocals about someone’s ability to be “casually cruel” (another great line) betray any bombast, darkening the corners of a fading picture.

Electronics again predominate the scene on “Cheerleader”, one of the most direct songs in St. Vincent’s catalog, lyrically, yet it is paradoxically inhabited with contradictions. With a distorted, pitch-shifted shadow of her brilliant voice haunting every word, she sings lines like “I’ve told whole lies with a half smile” and “I’ve played dumb when I knew better” with a convincing tremor. The repeated chorus of “I don’t wanna be your cheerleader no more” seems to end the controversy, Clark refusing to play to the masses anything that she doesn’t believe, to embrace anyone or anything that she doesn’t believe in, but she coyly admits that “I don’t know what I deserve/But for you I could work.” Even this Daria-esque refusal to play up to life has its smirking silver lining.

The moody, fluctuating “Surgeon” melts swiftly between sped-up techno flourishes and more Disney wall of sound, the former sounding like a sequel to Dirty Projectors’ “Stillness Is the Move”, complete with puffs of vocal melody, until it amps up the funk quotient, with squealing synth and record-scratch bass, before collapsing in on itself. “Northern Lights” chatters like anxious teeth, where more paradoxes like “It’s a champagne year full of sober months” rattle around in another surprisingly dance floor-friendly track. A radar ping rhythm opens the title track, cleverly burying a surf-y tune into a submarine, all echos and cold reality. Instead of the sunshine pouring out onto the beach, Clark is “sneaking out where the shivers won’t find you.”

Like at so many points in her catalog, Clark could easily be singing these songs with a smirk, letting everyone know exactly how clever she is. But, instead, her lyrical twists and turns aren’t primarily humorous (though, they do bring some smiles), but dark, almost gallows humor demanding a second look at the subject she’s skewering. The empty-set, heartbeat rhythms of “Champagne Year” are hope beating out for a chance. And, in the end, Clark coos that “it’s not a perfect plan/but it’s the one we’ve got,” simultaneously agreeing and demurring, refusing to go for the obvious slant rhyme of plan and have, a stuttered insecurity or doubt.

Later, the drunken horn skronk of “Dilettante” fades into a sweet, synthy swimming pool. While Clark is certainly expanding the instrumentation she uses, from album to album, there’s never a hiccup in execution. Perhaps it comes from working in indie rock orchestras like the Polyphonic Spree and Sufjan Stevens’ band, but she has an innate sense of scale, as well as an intensely technical, yet viscerally evocative, way around the instruments she employs.

Clark is telling her own stories in grand, masterful imagery and in heavily detailed, intensely characterized, smart narrative. With each album, her willingness to push the envelope in both halves of the equation grows, as if she trusts her audience to in turn trust her enough to follow her further along the path. And Strange Mercy achieves that sweeping goal, delivering on its promises, challenging thematically and intellectually, while also entertaining.