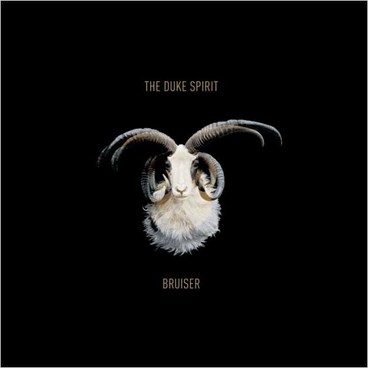 Bruiser is the third album from UK five-piece The Duke Spirit. With each offering spaced by well over three years, this band is clearly not one that believes in rushing into the studio. The Duke Spirit dispenses riff-driven rock with a raw edge and an air of menace in its delivery. In vocalist Liela Moss, the band has a true rock chick out front, one who avoids the excesses and more obvious stereotypes.

There’s more polish to Bruiser courtesy of producer Andrew Scheps, whose credits include Red Hot Chili Peppers and Jay-Z, yet it also instills the live feel you might expect from a classic touring outfit. The urgent drums, dirty guitar, and bass riff signal the first song “Cherry Tree” and lead into Moss’ anthemic sing-along. “Procession” follows its lead, continuing the feel of the band’s 2008 release, Neptune. By track three, the sparser piano-driven ballad, “Villain”, we begin to see a progression that largely flows through the album. Sad and emotive, it’s a strong song that explores a different vibe.

Equally arresting is “Don’t Wait”, a powerfully melodic song combining brooding verses with an impassioned chorus. At times, Moss sounds like a Scandinavian ice queen, vowels over-pronounced in a guttural twang, but her command of the vocal register is sure. Her low tones are understated, smoky and half-cracked, but she can rise to bursts of soaring high notes. She sounds a little like Bjork on “Surrender”, a song that really comes to life with some storming guitar as it reaches a crescendo.

The very best is saved until the last in the shape of “Homecoming”, a broodingly tender love song in which Moss spills her heart out and the sense of sonic control that pervades most of the record is suspended. In many ways, The Duke Spirit is one of those “Why aren’t they bigger?” bands. The components are there in the voice and presence of Moss and the tight solidity of the music. Maybe there isn’t the breakthrough killer song yet. Rather like the glorious “My Sunken Treasure” from Neptune, “Homecoming” comes very close to a silver bullet. Meanwhile, there is plenty here to admire, leaving the feeling that this is an album to grow to love.