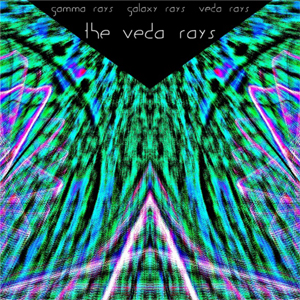 The Veda Rays‘ debut disc, Gamma Rays Galaxy Rays Veda Ray, should have their phone ringing come festival season next year. A first album can suffer, at times, from a lack of focus, but it’s clear during this short nine-song disc that they are certain about who they are and what their sound is.

Lead vocalist Jim Stark delivers a standout performance, while the band mixes rock, alternative, and pop together effortlessly. Album opener “All Your Pretty Fates” sounds like it could really come to life onstage. It begins a bit somber but really accelerates at the chorus, and Stark proves his vocal range from start to finish. “Out on Love” and “Long May She Roll” are two of the record’s strongest tracks, the latter coming across a bit like an indie Jane’s Addiction, as strange as that may sound.

The softest moment arrives during “Deleted”. With an acoustic guitar, Stark unfolds a tender first verse, with his voice trembling and shaking at each line. The only downside to the track, however, is when the drums come in midway through, overshadowing what Stark built and taking away the intimacy of the first two verses.

Though the album is almost short enough to merit EP status, the upside is that it merits some repeated listens. And while the record is oddly titled, once you hear Gamma Rays Galaxy Rays Veda Rays, you’ll not only remember it but also have a much better understanding of where this band is coming from.

Essential Tracks: “All Your Pretty Fates”, “Out on Love”, and “Our Ford”