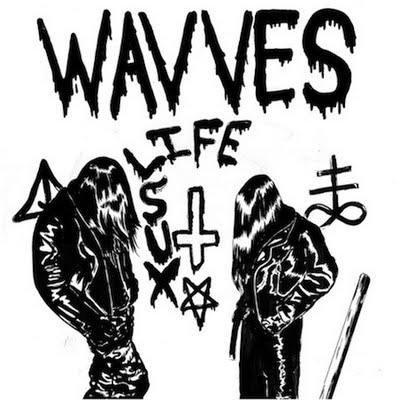 Wavves’ violently skuzzy take on surf rock has always leaned toward pop punk, but it’s especially evident on their latest release, Life Sux. From “Bug”’s opening na-na-na-na guitar licks, the EP sticks to the band’s historically Phil Spector-influenced rhythmic arrangements. But Life Sux, the first release off frontman Nathan Williams’ own Ghost Ramp label, comes close to his claim that “these are the best songs I’ve ever recorded.” The album’s brevity contributes to the feeling that it’s tighter and cleaner than King of the Beach. Perhaps that’s also because almost every song emerged first as an eye-catching MP3 (Best Coast is featured on “Nodding Off”! Fucked Up on “Destroy”!) before ultimately appearing together in this collection of singles.

On the bombastic, whiny “I Wanna Meet Dave Grohl”, Williams sings, “I can’t live with my mistakes/Get out of bed/Or face this day” even as he repeats, “never gonna stop me” with regards to meeting (and being) his man crush. “Dave Grohl” emulates Blink-182 in the best way, from Williams’ skater drawl to the peppy hand claps before the track screeches to a halt. “Nodding Off” ironically echoes backing vocalist Bethany Cosentino’s relationship woes on Crazy for You when Williams bitches about “waiting for [her] call”. The album turns darker on “Poor Lenore”, with its unassailably grungy walls of noise and guitar wails, bringing to mind Williams’ other claim that this album is his Nevermind.

“Poor Lenore”’s resigned anger spirals nearly out of control on “Destroy”, driven propulsive-ly forward by a stampeding tempo and Damian Abraham’s guttural yells. When the two of them command, “Destroy!” on the chorus, Williams sounds like a little boy next to Abraham’s practiced scream. Wavves doesn’t sound more hardcore by collaborating with Fucked Up’s lead vocalist; instead, the track sounds out of place on the album. As a whole, Life Sux reinforces Williams’ preternatural fusion of pop punk, surf rock, and now grunge. And that’s what he should stick with.