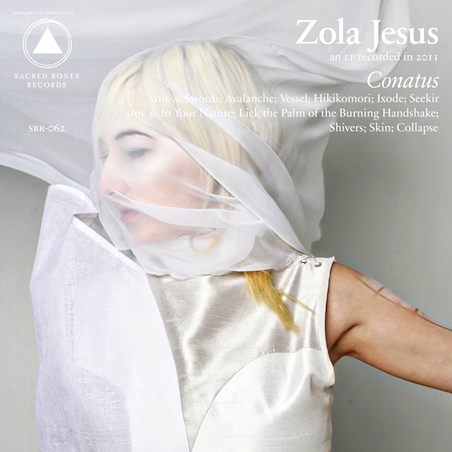 Some singers are blessed with the rare sort of voice that’s unmistakably theirs, and Nika Roza Danilova is one such artist. Under her stage name Zola Jesus, the opera-trained Danilova has paired vocals that are akin to a siren’s call with neo-gothic synths that carry the listener to an often sinister land of mystery. Conatus, the third Zola Jesus album in as many years, offers more of that enigmatically riveting synthpop, complete with shades of Siouxsie Sioux.

After opening with the brief, glitchy, chant-laden intro “Swords”, Danilova unleashes those signature pipes on “Avalanche”, a track as theatrical and darkly atmospheric as one has come to expect from Zola Jesus. On “Vessel”, Zola Jesus takes the dramatic, stratospheric vocals from “Avalanche” and switches the incessant drum machine rhythm for industrial beats. The two ready-for-the-dance floor styles flow together well, hinting at the subtle diversity possible in the cool sea of darkwave.

Danilova sheds some of Conatus’ gloom on “Seekir”, by pairing her monk-like chants with a delectably upbeat synthpop groove, slowly but steadily upping the pace to with “Ixote”, while never dropping the mystique along the way. On “Hikikomori”, violin sections add another dimension of eeriness to the formula. Providing a breather from the oddly danceable doom and gloom is “Skin”, a minimal piano ballad that reveals considerable warmth underneath the icy cool beats.

Rather than radically reinventing the sound from Danilova’s second full length, 2010’s Stridulum II, Conatus comes across as a more fully-realized Zola Jesus production. This album is elevating as well as moody, as it runs through various shades of both electronic and organic darkness. Although familiar by now, the Zola Jesus style has been refined enough so that it remains fresh and leaves the listener awaiting the next otherworldly journey.