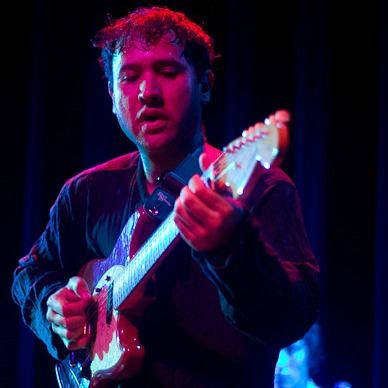 What’s “derivative”? Isn’t all music, for the most part, an afterthought of something before it? Isn’t it useless to sit and complain about how a band sounds stripped from something else? Do we really need to discuss ad-infinitum the odd similarities between early Coldplay and early Radiohead? Rhetorical question, but let’s answer it anyhow: Yes. Because more often than not, some acts get too gluttonous with influence. It’s not exactly stealing, but it’s the sort of similar grey area of finding a wallet on the street. At the end of the day, it’s not really yours.

So, what the fuck does this have to do with Unknown Mortal Orchestra and Toro y Moi? Or their gig at Chicago’s uber-friendly locale, Lincoln Hall? Surprisingly, lots. The thing is, we’ve seen too many acts this year “cribbing” former namesakes. Take Yuck, for instance. Great sound, great album. But, it’s not their own. You could listen to half of their debut’s dozen songs and your bells will all be ringing: Dinosaur Jr., Sebadoh, Jesus & the Mary Chain, and especially Sonic Youth. No complaints there, but it certainly merits a conversation on one act being “derivative”. This same argument applies to the The Pains of Being Pure at Heart and a good chunk of The Decemberists’ The King is Dead. There’s a way to borrow without being so, well, explicit.

Here’s a good example: Following Ava Luna‘s chummy, feel good set, highly applicable for a slightly rainy Saturday night, overseas collective Unknown Mortal Orchestra (UMO) dropped some loony bin-driven hallucinogenics on Chicago. Familiar ’60s psychedelia haunted the transfixed crowd for 45 minutes, starting with the drug-fused “Little Blu House” and concluding with the south side waltz of “How Can You Luv Me”. Vocalist Ruban Nielson, his guitar resting just below his neck, administered all the necessary reverb and scruff, running his vocals through a time loop, set for 1969. Close your eyes during his toe-chilling breakdown via “Boy Witch” and you’d easily convince yourself it was Clapton or Page.

Here’s the thing; though the band recalls the wavy, orchestral nonchalance of Blood, Sweat and Tears or the Bay Area haze of Jefferson Airplane, UMO skews to its own beat. Drummer Julien Ehrich is much to blame for this. On-stage, he looks like one of the scoundrels in Richard Linklater’s Dazed & Confused, yet sonically he borrows more from ?uestlove than, say, Mitch Mitchell. Because of this, you never feel locked into the tumultuous decade of our parents – which rings quite fruitful for the group’s future.

The same applies to Columbia, SC’s Toro y Moi. Although labeled a forerunner of the “chillwave” movement, Chazwick Bundick has made invaluable efforts this year to push past that label. And although his sound circulates in certain eras before his time, there’s never a static moment, or even a movement he lingers on. For his headlining performance at Lincoln Hall, the musician-turned-technician turned the previous garage rock house party into a flashy, sex-fueled ’80s rooftop fiesta. Opting for more instrument-heavy tracks like “Still Sound”, “New Beat”, or “All Alone” – three winners off his recent LP and EP – Bundick made his case loud and clear: He’s not only embracing familiar sounds, but he’s evolving them. Partly derivative, sure, but hardly stealing. To crib from the 90’s, specifically oft-forgotten vocal god Mr. Montell Jordan, “This is how we do it.”