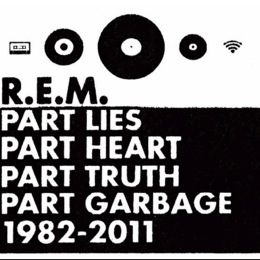 As previously reported, the recently disbanded R.E.M. will release a career-spanning retrospective, Part Lies, Part Heart, Part Truth, Part Garbage: 1982-2011, on November 15th via Warner Bros. Records. Today, an issued press release unveiled the compilation’s artwork (see above) and its lengthy tracklist. Spanning two discs and 40 tracks, Part Lies… will include material from the band’s entire back catalog, from their time as an underground rock sensations on IRS to their mainstream superstardom while signed to Warner Bros. Records.

In addition to classics like “Radio Free Europe”, “Orange Crush”, Man On The Moon”, and Coldplay’s favorite tune “Everybody Hurts”, the compilation will also include three new songs (“A Month of Saturdays, “We All Go Back To Where We Belong”, and “Hallelujah”), which were recorded with producer Jacknife Lee following the release of their most recent LP, Collapse Into Now. “We All Go Back To Where We Belong” will serve as the lead single and will hit both the radio and record shelves on October 18th.

The compilation will also include liner notes written by R.E.M’s four founding members, Michael Stipe, Peter Buck, Mike Mills, and Bill Berry. Said Mills in an issued statement: “Working through our music and memories from over three decades was a hell of a journey…We realized that these songs seemed to draw a natural line under the last 31 years of our working together.”