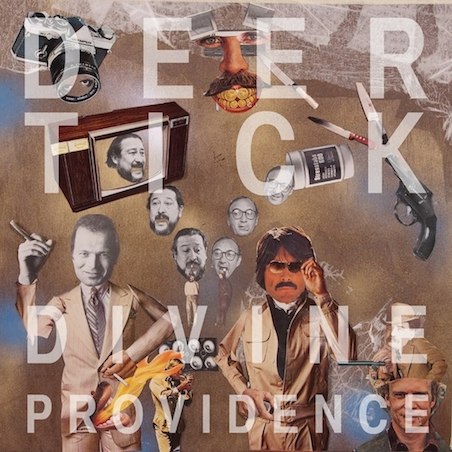 Never a band for subtleties, Deer Tick’s Divine Providence just might be the musical equivalent of the Rhode Island country/folk rockers burping in your face. Their fourth effort in just five years, the album is a mean cocktail of the band’s notable stage energy thrown into the studio and spit out in a rowdy, flying-by-the-seat-of-its-pants sound.

Deer Tick made a name for themselves with the artful handling of scrappy, blues-tinged folk, but their latest is more of a hodgepodge than the jangly Americana of 2009’s Born on Flag Day or the splintered beauty of 2010’s The Black Dirt Sessions. It’s electrified, full of studio chatter, beer-drenched antics, and yelps. “The Bump”, a boot-stomper that threatens to burst at the seams, spirals into a healthy dose of hollering and whistling, leading into “Funny Word” and its barked foreword: “you fuckin’ douchebag,” which is fitting for the garage jam. “Let’s All Go to the Bar”, the self-explanatory drunken-chorus jam, is a detour but still characteristic of the band’s typical snarl.

Drummer Dennis Ryan’s excellent turn at vocals on “Clownin’ Around” is about as country as the band gets, while “Something to Brag About” channels the loud and sweaty festival show of Deer Tick at their finest. The balls-to-the wall approach to the album shows a dynamic that any witness to the band’s live spectacle can attest to: altogether wild, fleetingly mellow, and not giving a damn in the least. The poppy “Walking Out the Door” gives guitarist Ian O’Neil the lead singer spotlight, but frontman John McCauley’s endearingly gritty voice carries “Electric” and the playful “Miss K”.

Louder than their usual approach (and with a gem of a bonus track in “Mr. Cigarette”), Divine Providence is the Deer Tick we’ve always known was behind the chugging, 90 proof country rock. This time they’ve just ripped off the studio filter.

Essential Tracks: “Clownin’ Around”, “Something to Brag About”, and “Now It’s Your Turn”