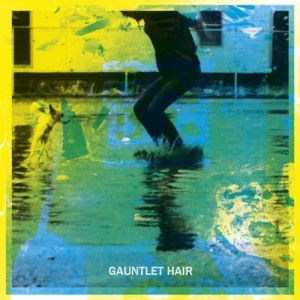 There has been a sense of thrilling secrecy surrounding Gauntlet Hair. Little was known of the Colorado duo, made up of Andy R. and Craig Nice, even as each of their sporadic single releases garnered Internet hype. Their noisy, brash percussion charged rock received feverish praise, even landing them record deals for a run of limited 7″s. Until a nationwide tour with The Dodos and this self-titled debut, they had yet to prove themselves beyond Internet buzz. It’s hard to ignore the noise now, as their first full length proves to be a commanding venture with unrelenting attitude.

Gauntlet Hair relies heavily on thunderous fuzz and boisterous percussion with garbled vocals that are rarely discernible. Opener “Keep Time” is a concave of vocal yelps carried by sweeping strings and livened by cymbals and ear-shattering drums. The turbulent “Mop It Up” unravels quickly, aided by furious cracks of percussion that match the ferocity of the throaty vocals.

A group early in their career, Gauntlet Hair is still experimenting, adding moments of unexpected pop to their garage rock. Even among screams from vocalist Andy R. on “Lights Out”, the varied grit of electronic drum machines that swirl with a flourish of keyboard make for a danceable number. “That’s Your Call” is reminiscent of an outtake from the early beginnings of Animal Collective. Breezy tropicalia guitars cling to drums awash in fuzz, all led by brisk vocals that interchange easily with disoriented chants.

The future of Gauntlet Hair is certainly undecided, their sound teetering between toned down simplicity like that of “Showing” and the abrasive noise rock with a sweet side found on “Top Bunk”. A new batch of fans will certainly be charmed, but where the band’s sound is headed next remains to be seen. The mystery of Gauntlet Hair is what keeps them so intriguing.