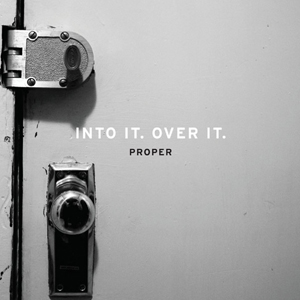 Although the decline of pop-punk was considered a relief to a public that had just spent the better part of a decade wallowing in self-loathing and love/life frustrations, Into It. Over It.‘s reincarnation of the often disregarded genre is anything but a nostalgia kick. Selected works from Evan Weiss’ ambitious 52 Weeks project hinted at this in late 2008 and his first traditional LP, Proper, emphatically demonstrates it once more. Using studio time to flesh out the bare melodies of previous works with a full band (see Twelve Towns), Weiss creates a refreshing mix of contemplative indie and pop-punk, maintaining the lyrical depth while abandoning the pretense of primarily acoustic pop.

Proper shines in this aspect from the onset, with the one-two punch of “Embracing Facts” and “Discretion & Depressing People”. Pounding drums accompany harmonized vocals and bouncy guitars; it’s a sound we have all heard before, but Weiss does it well with an irresistible, tireless energy. The front half of Proper is strong, but the undeniable highlight is “Midnight: Carroll Street”. Swapping the party punk for a down-tempo meditation on life, “somewhere between caffeine and nicotine,” Weiss’s vocals are the most confident here – especially in the piano-driven, two-minute breakdown halfway through – proving his versatility in creating both ballads and party anthems.

The momentum temporarily falters as the underwhelming “Staring at the Ceiling” and its disjointed guitar rolls around. Another standout, “P R O P E R”, swiftly recovers, though, with its visible production sheen that Weiss’s music had heretofore left unused in full swing, epitomizing the clean and tight, yet immediate, instrumentation that characterizes most of the album. The abundance of life-affirming “whoa-oh-oh”s doesn’t hurt its case, either. All in all, while a bit patchy in places, Proper is just that – a proper execution of Weiss’ seemingly endless talent and a potential sound brought to fruition, all resulting in a “debut” album that can’t help but be around for awhile.