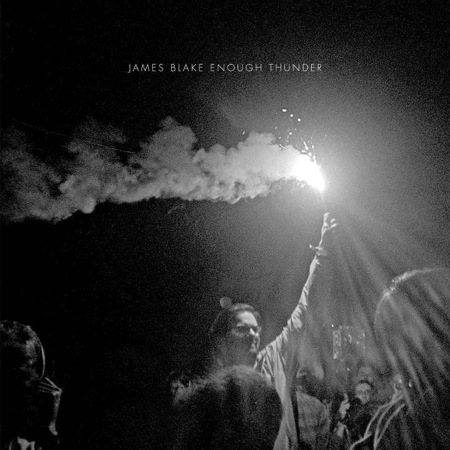 On Enough Thunder, James Blake strips back the effects board and quivering bass for a surprisingly sparse effort, taking on the role of balladeer and even covering Joni Mitchell on his way to an effort that’ll divide the droves of fans he’s won over since the release of his self-titled debut earlier this year. It’s an intriguing move: in the short time since his debut, he’s more or less become a poster boy to dubstep’s stateside invasion by an audience perhaps too eager to put a face to a name. More importantly though, the acclaimed LP was most celebrated for stretching the conventions of bass music and dubstep to fit Blake’s warped take on singer-songwriter folk, with nearly all of its high points – the pop-up bass rumble of “Limit to Your Love” and “I Never Learnt to Share”‘s manic breakdown, being its bassiest. Why abandon it now? Is this perhaps a show of protest that fits in with his recent flare-up over American dubstep producers’ (we’re looking at you, Skrillex) devolution into loud, wobbly “pissing competitions”?

That might be part of it but, all things considered, this is a pretty natural progression that’s in line with some of James Blake‘s less abstracted half. Trouble is, that isn’t the half that got people all riled about Blake to begin with. The only track off of the LP that’d really fit in here was “Give Me My Month”, a spare piano ballad that stood out like a sore thumb between “Limit” and the popping drums of “To Care (Like You). Even so, this isn’t so different from the James Blake we’ve come to know and love. Enough Thunder is wrought with Blake’s now familiar touch, most notably in his extensive use of silence, his tracks often playing out kinda like a David Lynch film, purposefully hesitant in the way they creep along, so as to keep the audience on the edge of their seat half-expecting some unearthly entity (or in Blake’s case, a bassline) to crop up at any instant. Except, on Enough Thunder, one never does.

In more fickle hands, this would grow tired after a track or two but Blake is fast proving a master at his craft. The driest track of the bunch is a take on Joni Mitchell’s adult-contemporary radio fixture “A Case of You”, a song that’s been covered by everyone from Michelle Branch to Prince. Rather than rework it as he did on “Limit to Your Love” though, Blake simply repurposes Mitchell’s guitar for his own piano for a surprisingly unadorned and forthright effort.

It’s interesting to hear him this bare, too. While James Blake certainly stands as one of the year’s best records, it’s interesting to note that he didn’t pen either of its most buzzed-about songs (“the Wilhelm Scream” or “Limit to Your Love”). Here, he’s penned all but one. Blake has said before that he doesn’t cloak his voice for any particular reason, but it’s impossible not to note his fast-growing confidence in his own voice and songwriting abilities, as he continues to grow into one of the most compelling musicians today.

Essential Tracks: ”A Case of You”, “Once We All Agree”.