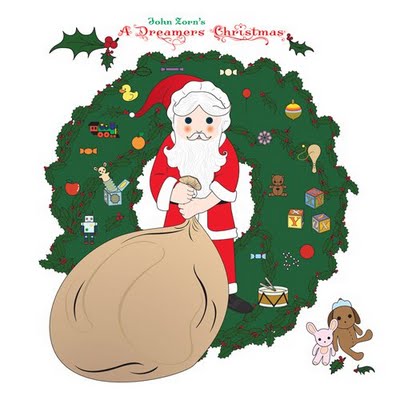 A Christmas album in the middle of October can be a hard sell. However, little Santas and jingle bells will soon be popping onto drugstore shelves, so maybe it’s not that far out of season. Even more convincing is the fact that we’re talking about a John Zorn Christmas. The MacArthur Genius brought back a cabal of frequent collaborators from 2008’s Dreamers (and 2001’s The Gift) to lend some jazzy eccentricity to your holiday parties.

Despite the fact that Zorn himself can be notoriously odd and difficult, A Dreamers Christmas leans closer to jazz standard than it does to the spasmodic bebop/hardcore of Naked City. On “Winter Wonderland”, a smooth intro lurches into a twanging swing, Marc Ribot’s twinkling guitar, Trevor Dunn’s chorded bass work, and Joey Baron’s skipping kit work sidle along, and Kenny Wollesen’s agile vibraphone solo brings everything to a nodding bliss. The atmospheric take on “Christmas Time Is Here” rides largely on Jamie Saft’s beautifully trilling piano and Cyro Baptista’s skillfully minimalist chimes and other alt. percussion flourishes.

The album is composed of seven traditional holiday tracks and two Zorn originals. “Snowfall” is the first of the originals, a track that probably perfectly captures the feeling of being inside an “Island Christmas” snow globe, equal parts surfy goodness (Ribot’s sea-swept chords and Baptista’s bongos) and wintry goodness (Saft and Wollesen’s fluttering interplay). On the traditional end, “Let It Snow! Let It Snow! Let It Snow!” twangs and kicks with some off-kilter keyboards and clanging guitar melody, while “Santa Claus Is Coming to Town” gets the jazziest treatment, sped up under Dunn’s upright plucking and rapid piano themes.

The inimitable Mike Patton contributes vocals to a take on “The Christmas Song” (perhaps better known as “Chestnuts Roasting on an Open Fire”), and it’s not as creepy or weird as that might suggest. Instead of yelping and barking, the one-time Faith No More and Mr. Bungle vocalist produces a sonorous, lush, husky take on the classic, one that is (like the whole album) interesting, captivating, and pleasing for every member of the family at your holiday party.

Essential Tracks: “The Christmas Song”, “Santa Claus Is Coming to Town”, and “Snowfall”