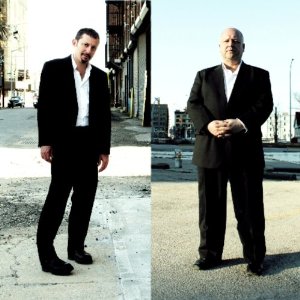 Despite the feeling that the always recognizable and idiosyncratic Pixies have contributed aplenty to the musical landscape of the last 20 years, Black Francis, their singer and chief songwriter, is still more diverse than he seems. If you compared his first solo album, 1993’s grunge-infused Frank Black, with the sometimes-country stylings of 2006’s Fast Man Raider Man or even the synth and brass re-arrangements of Pixies songs on Frank Black Francis, you’d stumble upon three very different albums with an assortment of styles.

But one thing that Black Francis couldn’t change if he tried is that voice of his. He could front an opera or produce a techno album, and you’d know it was him as soon as his sandpaper snarl hit the speaker. Because of this, he’ll always be, to some extent, the man who drove the Pixies (or Pixies will always be the collective that drove Black Francis), and the man is largely inseparable from that music.

Paley & Francis isn’t any different. Teaming up with Reid Paley for this 10-track LP, it’s quite obvious who’s leading the arrangement from the beginning. First track “Curse”, a shuffling snare supporting an aggressive, walking bass line and a characteristically dirty guitar, is an excellent example of the Black Francis style, and as Francis opens, in that strangely scintillating, almost-out-of-tune vocal melody style of his, with “You got away but your stink remains/ That’s okay: I’ll bring down my foot on your daisy chain/I’ll have a drink from your jugular vein/I’ll unleash my cats on your salty brain,” fans will know exactly where they are.

But Reid Paley is equally authoritative. “Take Your Time”, on which he takes lead vocal, is a slow, Wild West number lead by a lolling piano and couldn’t be further away from a trademark Francis style. Paley’s vocal peculiarities (think more like Tom Waits) are more original than the track’s musical style, which circles around country tropes.

That combination of strong musical personalities works beautifully. While Paley & Francis could have broken down amidst these two styles, the duo unite behind a banner of country and folk, while the dichotomy of abrasive (Francis) and soft and sweet (Paley) pulls each track away from that united center, creating tension among a set of melodically satisfying songs.

That feeling is clear across the board. “Ugly Life” and “The Last Song”, more sentimental, are maybe Paley’s best contributions and represent warped takes on bubblegum pop, while Black Francis takes care of the more disturbing and muddy songs, such as “Magic Cup”, which is stripped down and forceful. It’s only with “Crescent Moon”, a slightly sad, sensitive, and sweet song led by Francis, that the formula really breaks: It could be a Neil Young track, his voice hitting the upper limits of his register.

What Paley & Francis does incredibly well is smooth off part of the distinctiveness that marks the music of both members of the duo, combining it into a pleasant, largely poppy melange that you can sing along to rather than be disturbed by. If country and folk were to marry grunge and alternative rock, this album would be their best-looking child.