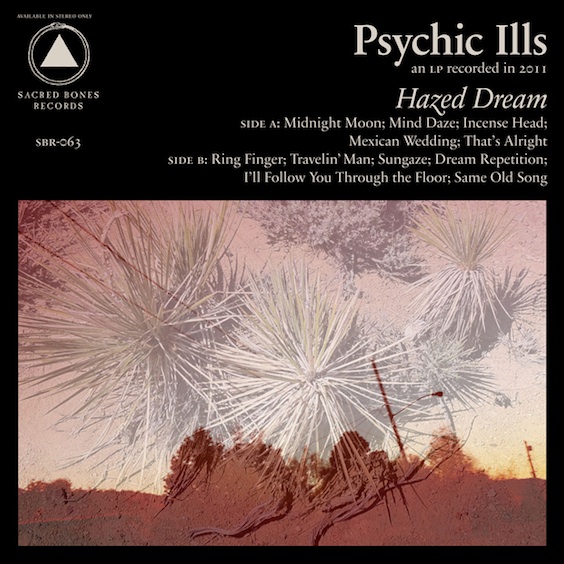 Some music drifts so effortlessly that it welcomes complete resignation and submission to its guile. Psychic Ills‘ latest LP is about as cunning as an apathetic drunk signaling for you across the bar who’s looking for any other bed to sleep in but his/her own. And depending on the kind of day you had, you may just give in. Hazed Dream is a plodding, dusty kind of psych that comes standard with phased guitars, droning organs, and a slurred and sparse percussive backbone. Imagine what would happen if you left The Melvins or The Velvet Underground out in the desert to die, and you’re swirling around some of the right ideas.

And swirling around ideas is right where the NYC trio aim to stay. Just as one starts its sequence for takeoff, the short song is over, and the band counts off the next one. Having a record full of pop-drone songs that all clock in right around the four-minute mark can be counterintuitive for a record predicated on repetition, but it’s nice to see a focus on songwriting here, like the lolling “That’s Alright” or the lolling “Mind Daze” or the lolling and a bit longer “I’ll Follow You Through The Floor”. Each song is taught, spare, and proves difficult to seek out specifics from song to song so that Hazed Dream eventuallly materializes as variations on the same theme of cannabis-companion songs. The micro repetition compounded with the macro repetition has this album coming out a little baked-over.

Without the looseness of Woods’ folk-psych or the energy of the San Francisco garage-psych, Psychic Ills lands off the radar on the current landscape, which overall is a good thing on Hazed Dream, but the album suffers when you take into account how truly lackadaisical and emotionally vague it ends up being. It’s too often a shell without a filling to serve as a ride from front to back, on drugs or otherwise.