Thomas Dolby – A Map of the Floating City 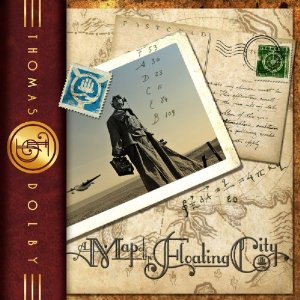 “Hey, any fool can write a hit,” Thomas Dolby half-jokes on A Map of the Floating City, his first album in almost two decades. Maybe so, but that’s no reason to dismiss this one.

Let this be an inspiration to future one-hit wonders. Dolby, best known to Americans for his 1982 single “She Blinded Me With Science”, could have fallen to the same fate as many of his peers – eking out a career, decade after decade, to increasingly smaller audiences at casinos and state fairs, succumbing to painkillers or reality TV or self-tanner. Instead, he quit music in the early ’90s to start the Silicon Valley company that devised a ringtone synthesizer now embedded in billions of cell phones. He’s also served as the musical director for the annual TED Conference for 10 years.

Dolby’s time off from a solo music career no doubt built up the sharply creative urge that pulses through A Map of the Floating City. Now retired from the tech industry, he lives on the North Sea coast of England and records his music in a lifeboat powered by renewable energy. Musically, he blithely hops from genre to genre, techno pop to salsa to Americana twang to jazz to a soothing, Auto-Tuned ballad that wouldn’t sound out of place in a yoga class (“Oceanea”).

The album is structured like a soundtrack because it is one, sort of; it accompanies the interactive dieselpunk game Dolby developed, The Floating City. He describes the three-part album as “a travelogue across imaginary continents”: Amerikana, Urbanoia, and Oceanea. Without a gamer’s insider knowledge, non-players may miss out on themes or lyrical meanings in the album. But Dolby writes lyrics rich and unexpected enough that a little inscrutability doesn’t matter much.

The opening track, “Nothing New Under the Sun”, has no hidden meanings, however. Accompanied by a forward-charging drumbeat and swaying harmonies, Dolby’s self-aware lyrics about a “legend” struggling to write a hit are crisp with concrete imagery: “Somehow the cancer found a lung/You woke up to hear your words on the tip of every tongue.”

Dolby is at his best when he has a story to tell, whether it’s the traditional boy-meets-girl narrative of “Road to Reno” or the jittery whisper of “Evil Twin Brother”, in which a restless and hot night in New York City erupts into a refrain with a booming dance beat. Listen closely; that’s Regina Spektor voicing the sound snippets of the Eastern European diner waitress.

A Map of the Floating City rewards repeat listens. Elements that sound strange at first, like a jarring blast of harmonica on “To the Lifeboats”, make sense after you let Dolby make his case for them a few times. The sentimental flourish of strings on “Love Is a Loaded Pistol” stretches a bit too far, but overall Dolby proves his keen ear and impeccable taste for arrangements.

Essential Tracks: “Evil Twin Brother”, “Simone”, and “Nothing New Under the Sun”