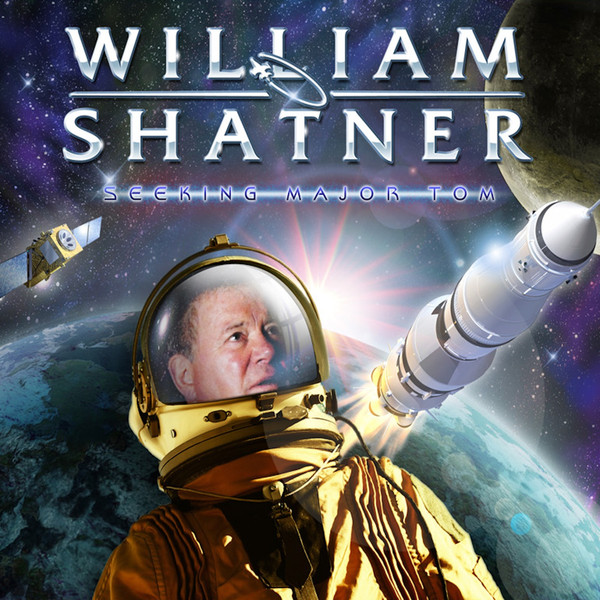 When put to music, William Shatner’s signature delivery, where nearly every word is dramatically emphasized and followed by a dramatic pause, elicits either flat-out loathing or an ironic enjoyment. By now, nearly everyone has had exposure to Shatner’s musical career or at least witnessed a parody, so reviewing his new album ought to be an exercise in futility. Word of its existence will either send everyone scrambling for a working phaser or inspire morbid curiosity, right? Everything changed after 2004’s Has Been received surprisingly positive press, especially for his vitriolic interpretation of “Common People”, giving legitimacy to a musical career dismissed as a novelty decades prior.

William Shatner’s third studio album, Seeking Major Tom, begins with actual NASA sounds before going into his expected spoken-word take on Peter Schilling’s New Wave hit “Major Tom (Coming Home)”, followed by David Bowie’s “Space Oddity”, the song to which Schilling was paying tribute. The “Space Oddity” here conveys the spacey isolation of the original in Shatner’s own style and serves as the catalyst for the album, weaving together various songs into a story about the album’s namesake, whom he is portraying.

Driving the point home that Seeking is a concept album, songs fade into reprises of earlier pieces, such as at the conclusion of “Learning to Fly”, where Shatner returns to “Major Tom”. Along for the ride are impressive collaborators, ranging from Zakk Wylde on a surprisingly rocking “Iron Man” to a duet with Bootsy Collins on a funky “She Blinded Me With Science” that stands out from an album drenched in weirdness as truly bizarre. Although the variety of supporters helps, Seeking is at least eight songs too long; the concept and Shatner’s style often wear out their welcome. Shatner’s desire to be taken seriously as an artist seems to be at odds with his penchant for self-parody. On Seeking Major Tom, William Shatner is also searching for himself.

Essential Tracks: “Bohemian Rhapsody”, “She Blinded Me with Science”