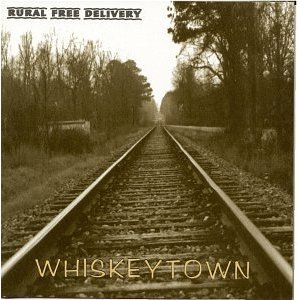 For the record, there are only three full-length releases by Whiskeytown, and Rural Free Delivery is not one of them. It isn’t a greatest hits compilation, nor is it a collection of B-sides and rarities. Recorded in early 1995, within the first few months of Whiskeytown forming, RFD is eight songs (nine with the bonus track), mostly rough cuts and demos, ranging from subtle folk-y ballads to outright rocking alt-country blazers, and shows an early Whiskeytown, influenced by the likes of Gram Parsons, the Replacements and Uncle Tupelo, as well as Ryan Adams punkier past, finding and fine-tuning its sound. It also represents, in the most black and white interpretation, a case of a label extorting a band on its roster.

In 1995, the band released a four track EP, Angels, and quickly followed it up with full-length, Faithless Street. Finding themselves with an ever-growing cult following and being hailed by music critics, in particular, alt-country press flagship No Depression, after a performance at the South by Southwest Music Festival, Whiskeytown were courted by Outpost Records, an affiliate of Geffen. In order to get out of the contract with Mood Food Records, Whiskeytown was forced to sell the rights to their session master tapes. Almost a full two years after recording, Mood Food, in an effort to capitalize on the band’s new found success, released Rural Free Delivery a few months before Whiskeytown’s major label debut, Stranger’s Almanac, dropped in 1997. Adding insult to injury, the half of music contained on RFD was previously released on Angels EP, with the song, “Angels Are Messengers From God”, simply being an alternate version of Faithless Street’s title track.

Combining electric guitar with country fiddle, album opener ”Take Your Guns To Town”, a song originally found on Angels EP, and later track “Oklahoma”, an uptempo rocker that Adams apparently hates, are probably as close as Whiskeytown ever got to actually sounding like Uncle Tupelo, or at least Jay Farrar. Considering the material on RFD is some of Whiskeytown’s earliest music, it is not surprising to hear a song or two sound similar to the alt-country outfit. However, the similarity ends with these songs, as the remaining tracks on RFD are rather representative of Whiskeytown proper, even the Black Flag cover.

Transforming Greg Ginn’s aggressive guitar work and Keith Morris’ rage infused vocals on “Nervous Breakdown” into a countrypolitan hoot results in a song that is almost uniquely Whiskeytown, and if you didn’t know any better you might think it was an original number. A country/alt-country band covering a punk song is not that surprising in today’s (or even 1995’s) musical landscape. It isn’t that Whiskeytown covered a punk song, but rather that they chose Black Flag’s first single that is demonstrative of where Ryan Adams comes from as a songwriter and performer.

What’s even more telling is Adams’ lyric in “Angels Are Messengers From God”, the closing track to RFD and pseudo-title track to the Angels EP. When he sings, “I started this damn country band because punk rock is too hard to sing”, he puts a spotlight on his entire approach to his art and his band. (And if you’ve ever heard his project The Finger, a little empathy for punk vocalists is warranted.) This song would be re-recorded with a slightly better vocal track and get retitled to become the Faithless Street’s titular number.

In addition to “Angels…”, the songs “Tennessee Square” and “Captain Smith” were also first heard on the Angels EP, with the former making another appearance on Faithless Street. Featuring vocals by Phil Wandscher (who also sang on Faithless Street’s “Top Dollar”) rather than Ryan Adams, “Captain Smith” channels Gram Parsons and has a toe-tapping quality that leads right into the uptempo rollick of “Macon, Georgia County Line”. The remaining song, “Pawn Shop Ain’t No Place For a Wedding Ring”, is a slow, sad piece delivered in a dry manner (a bit ironic for a band notorious for being “wet”) and representative of what a “Whiskeytown ballad” is.

For being outtakes, rough cuts, demos or what have you, the songs on Rural Free Delivery are all well crafted, well performed and well recorded. Considering that half the material has been made available elsewhere, and perhaps in better form, there is some difficulty in warranting ownership of this album unless one is a completionist. If any argument is to be made, it would rest on the strengths of the Black Flag cover, the beautifully sad ballad in “Pawn Shop…” and the fact that, regardless if all the songs aren’t new, they’re still damn good and some, like the previously mentioned songs, are only available on this album.