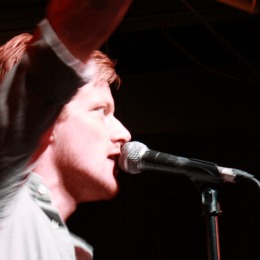 In case you couldn’t tell, we’re kind of infatuated with Astronautalis, aka Charles Andrew Bothwell, here at Consequence of Sound. But like all great love stories, it’s a love triangle, and Minneapolis definitely plays the part of the underrated best friend who just might get the girl in the end. “People ask me, why did you move from Seattle to Minneapolis?” Bothwell said in one of his frequent, consistently entertaining soliloquies onstage at the Triple Rock Social Club last night. “And because I’m a Southern boy, I’m too polite to tell them that I feel more at home in Minneapolis than I do anywhere else.” You only had to look behind you at a roaring crowd (including local musicians like rappers Mike Mictlan of Doomtree and P.O.S. of Rhymesayers) proud to call Astronautalis their homeboy.

Local nine-piece (seven now, but who’s counting) collective Me And My Arrow opened. At first, I thought their heavily string-based, raucously countrified rock was an odd fit for Astronautalis. But after playing for a while, their dense arrangements and strangled vocals mimicked Bothwell’s. Despite the sheer number of people onstage—including a bassist whose instrument was, literally, as tall as she was and a seated cellist who was clearly the frontwoman—Me And My Arrow were tight and cohesive.

Votel, formerly H.U.N.X., played next. It too is a music collective of sorts, featuring members of local bands Solid Gold, Digitata and Marijuana Deathsquads (bands who also contributed their talents to Minneapolis supergroup Gayngs. Confused yet?). Husky-voiced Maggie Morrison makes her presence known among the deep, vision-vibrating bass with echoing, distorted yelps and intonations reminiscent of Portishead or Black Dub. With no recordings outside of demos and various live cuts, Votel often improvises on stage. With that in mind, the band’s first song sounded suspiciously like a riff off Kid Cudi’s “Day N Nite”.

Before Astronautalis took the stage, the Triple Rock finally hit capacity. Wading through the thunderous applause and countless grins, Bothwell dove straight into “The River, The Woods”, the first track off his latest LP, This Is Our Science. He bounded about like a sweaty tennis player, invoking the audience to “sing the fuck along”. Even when he slowed down for more introspective tracks like “Measure the Globe” and “Secrets On Our Lips”, the veins in his neck bulged and he showered the front row with spit.

Astronautalis more than agreeably played old favorites “Short Term Memory Loss” off The Mighty Ocean and Nine Dark Theaters and Pomegranate’s “Trouble Hunters”. During the latter, he freestyled about his first sparsely attended show at the Dinkytowner before climbing off the stage and into the fray. There, he encouraged everyone to vote, support both Occupy Wall Street and Occupy Minnesota, and to drunken men: be careful of the cute girls in the audience.

After finishing “Trouble Hunters” back onstage, Astronautalis segued into the freestyle portion of his set, in which he asked participants for topics. This time, it was Pepto Bismol, Calvin and Hobbes, quantum entanglement, Dr. Who, and the flux capacitor. “Y’all are a bunch of nerds,” he said before launching into an extended rap that, remarkably, managed to touch on all those subjects. And with a new glass of whiskey in hand—in his enthusiasm, he knocked over his old one on stage (“There’s a special place in hell reserved for people who waste whiskey like me”)—he finished with “Lift the Curse”. His band mates continued the song’s instrumentation until Bothwell returned to the stage to encore with “The Wondersmith and His Sons” and “The Case of William Smith”. As Bothwell said himself, it’s good to have him home.

Previous Story
Everything is a Remix – Part 3: The Elements of Creativity
Next Story
CoS and Empty Bottle Presents: A screening of the documentary Echotone
Popular
More Stories
[fu-upload-form form_layout="media" title="Submit Your Photo"][input type="hidden" name="ugc" value="1"][/fu-upload-form]