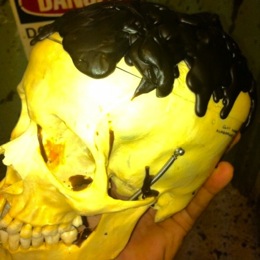 After months of releasing songs in severely absurd ways, collaborations a-plenty, manufacturing marijuana-flavored gummy skulls, and recording a 6-hour song, The Flaming Lips are now unveiling their 2011 piÃ¨ce de résistance. Beginning now (so long at it’s 12 a.m. CT), the band will be streaming its 24-hour song, “7 Skies H3”, in full at the aptly titled FlamingLips24HourSong.com.

Update: The website only allows for 999 listeners at a time. As of 6:54 AM Monday morning, 874 folks are already dedicating their day to this venture.

As previously reported, ”7 Skies H3″ is also being released on a USB drive packaged inside a chrome-covered, real-life human skull. According to Pitchfork, only 13 skulls are available for purchase and they run for $5,000 a piece. You can order your own at the song’s website.

Below, you can stream the band’s six-hour song, “I Found A Star On The Ground”.