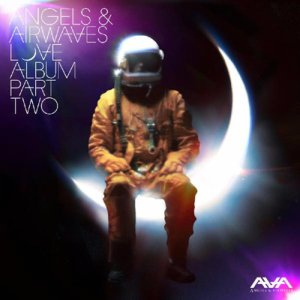 Since its inception, Angels & Airwaves has skewed toward over-the-top melodramatics, as if they’re some kind of space age U2. While the band has made their Pink Floyd influence known, that kind of musicianship isn’t present on Love: Part Two, aside from the opening intro, which sounds “far-out, man.” Born out of Blink-182’s 2005 disintegration and now coexisting with the reunited trio, is Angels & Airwaves still worth paying attention to?

Before Love: Part Two, there was, naturally, Love, which was given away as a free download alongside a sci-fi film of the same name that explored human connection through the eyes of an astronaut stranded in outer space. It’s like the poor man’s geeked up version of a band that wishes it were as convincing as Green Day at making a rock opera into a Broadway success. While Tom Delonge certainly has his trademark sneer and predictable melodies (like, say, Billie Joe Armstrong), he never pushes it to something truly grandiose, yet the intention of highlighting the album’s themes are there.

“Surrender” and “Anxiety” are the album’s best tracks, yet neither is so different that it couldn’t sit comfortably on Blink-182’s recently released Neighborhoods. The darker mood and feel-good message are both intact on “Surrender”, over a pounding drum beat and Delonge’s typical chord progressions. The only thing the track’s missing are Mark Hoppus’ harmonies. Meanwhile, “Anxiety” is Angels & Airwaves hitting their stride – a groove-driven melody and soaring hook making it catchy enough to keep it ringing in your ears.

The rest of Love: Part Two falls flat, and repeats itself. The unconvincing, synthesized suspense of “Moon as My Witness” and the fails-to-be-epic “We Are All That We Are” just go to show that Delonge is best when he’s sticking to his simple-minded Blink-182 formula.