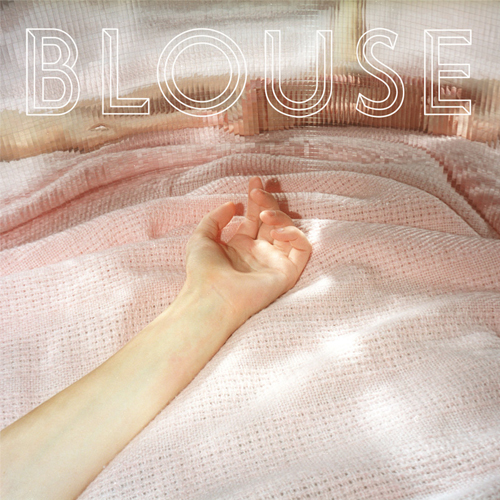 It’s too bad Blouse didn’t come out with their self-titled debut sooner; at first it seems like the Portland, OR trio is just riding the coattails of other ‘80s-influenced noun bands like College and Desire (and we know they’re the real deal because they were in this year’s hit indie film, Drive). But really, Blouse is the Platonic ideal to which these other artists aspire: the soundtrack to the putative John Hughes movie. Band member and producer Jacob Portrait, who has also produced The Dandy Warhol’s psychedelia and Starfucker’s arcade electronica, cleanly melts post-punk instrumentation with Charlie Hilton’s ethereal vocals. Blouse avoids dismissal as just another ‘80s dream pop group with a consistent, sophisticated grasp of the genre’s tenets.

On the band’s first single, “Videotapes”, synthesizers bend and squeal like a bad VHS recording around Hilton’s reverberating reminiscences. Though this same nostalgia underlies Blouse, much of the album is more minimalist than the aforementioned tracks. “Controller” relies simply on Hilton’s deadpan delivery and monotonously driving guitars that would sound equally at home behind Ian Curtis. This simple, versatile juxtaposition adds pathos to “In Black” (aided by Hilton’s Victoria Legrandian sighs) and barely suppressed bitterness to the growling bass on “They Always Fly Away”.

Hilton addresses this nostalgia value—besides the airy, meandering “Firestarter”, which could be a reference to Drew Barrymore’s 1984 breakout film—on “Time Travel”, singing, “I was in the future yesterday/But now I’m in the past/And it keeps taking me back” against propulsive synths like the inexorable march of time. “Fountains In Rewind”, while sharing a temporal title, is more evocative, opening with washed-out organs before bombastic drum machines take over. It closes the album not unlike how The Cure’s “Plainsong” epically ends the Marie Antoinette soundtrack, a denouement just as fitting for Drive as “Real Hero”.