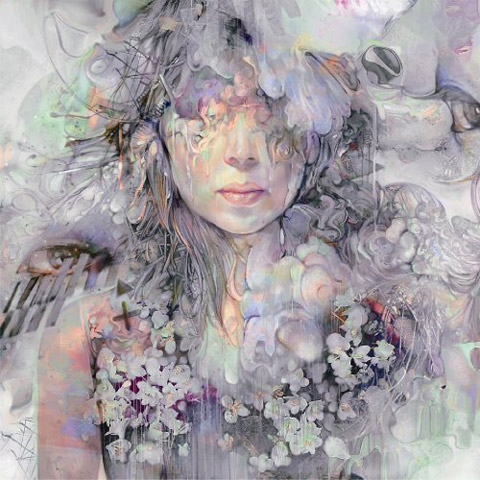 To call Boris prolific is an understatement. New Album is their third album this year, and that’s not counting the Merzbow collaboration, Klatter. Although Boris is most commonly associated with metal of the drone and sludge varieties, they have been mixing it up ever since their 1996 debut, Absolutego, never being the same experimental metal band twice. In the case of New Album, Boris has gone unabashedly pop.

The majority of New Album consists of variations of songs that previously appeared on Boris’ other 2011 albums: the hard-hitting Heavy Rocks and Attention Please, with its dream pop stylings and Wata’s breathy vocal coos. As relentless as it is shimmering, the propulsive sonic blast of “Spoon” recalls the brand of shoegaze-infused pop perfected by recent tour mates Asobi Seksu, and on New Album, synths and digitized sound effects highlight the song’s pop hooks. However, compared to its Attention Please counterpart, the New Album version of “Les Paul Custom ’86” lacks bite without that menacing guitar riff.

Curiously absent from the American version of New Album is the top 40 electropop versus Nine Inch Nails mashup “Black Original”. In its place is the even more thrilling “Luna”, which is akin to Boris unleashing their signature metal at its frenzied best while in the middle of My Bloody Valentine’s “holocaust section.” What makes New Album stand out among the rest of their admittedly diverse discography is how the band appropriates the tropes of the popular music of their native Japan and twists them in a manner that makes the songs distinctly Boris. “Flare” has the J-pop sensibilities and delighted urgency that would make it a perfect anime theme song, while the reworkings of “Jackson Head” and “Hope” would be at home on the kind of quirky video games that Sega used to make. The J-rock-gone-metal incarnation of Boris on New Album stands as their most drastic reinvention yet.