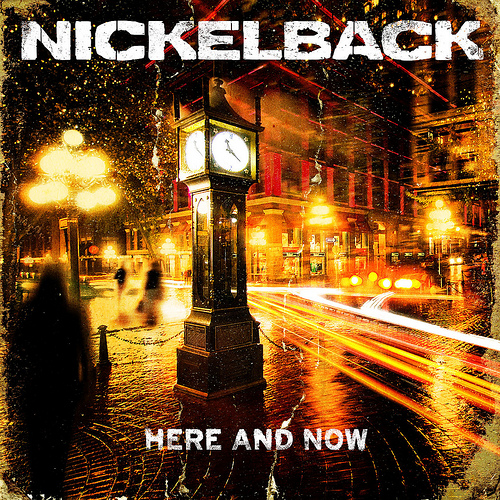 Nickelback has, in recent years, proven itself virtually bulletproof against a slew of negative reactions, including some on this very site. The band wins industry-certified awards, yet it still invokes the petitioning wrath of a state known for giving the world the Insane Clown Posse. Regardless of who you’re rooting for musically, when a pseudo-rap group in carnival face paint gets a yearly festival in its honor, and the Detroit Lions ask your band to leave, well…best get to riding out.

Here And Now stands nearly identical to Nickelback’s last three albums in terms of track arrangement, though unlike the ’08 perv proponent Dark Horse, hedonism is a little less prevalent at each turn, despite party anthem “Bottoms Up” being a lead-off single. Here And Now predictably falls off the radar by its own third track–single number two, “When We Stand Together”, an “Everyone Cared” copycat left proving that Chickenfoot has more relevance and depth in one recent socio-political outset than vocalist Chad Kroeger and company have had their whole career.

Sharply played “Midnight Queen” feels like a song that AC/DC could have done 10 times better, while future guilty pleasure “Gotta Get Me Some” is a loud and loaded “Bottoms Up, Part II”, without the class to admit it. “Lullaby” gets crippled by voice effects, as “Trying Not To Love You” apes “Someday” as though it totally hasn’t been out of style since 2004. “Kiss It Goodbye”, boasting a “Shit Is Fucked Up” cautionary element and the hardest edge since “Side Of A Bullet”, gets left sequentially, sonically, and proportionally out of place amidst the brand Nickelback has unintentionally become.

Every critic that has ripped into these once-welcomed transients from the north will most likely do so again, here. Pop culture has made that job so damned easy, the challenge becomes whether or not we can salvage anything from Nickelback’s latest releases. The answer is as relative as any music, popular or otherwise: All we ask of you is to understand why a lack of substance, though mildly amusing, is no substitute for wholesome art. Here And Now might prove to be a step above the last effort, but likewise a step high enough to hang its creators on a barn rafter.