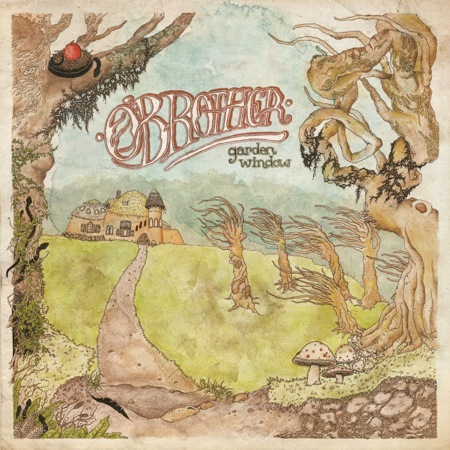 The reign of fuzzy alt-rock has erupted like clockwork over the last couple of decades, spawning and regenerating into more forms than Doctor Who in a first person shooter. Immediate and jarring, oftentimes lengthy or hauntingly animalistic in nature, this almost second cousin of stoner metal is a harrowing spiral staircase away from classic doom or incomprehensible black metal. Fervent, urgent, elaborate, a slightly acquired taste–acid on a repeatedly scuffed salt block, toward which O’Brother (maybe unintentionally) offers a mighty and professionally executed contributory strike.

Hailing from Mastodon’s own Atlanta, GA, this monstrosity of monumental sonic awesome, easily mistaken for stoner metal in places, is not a unique snowflake. O’Brother has the brutality of Kylesa (“Malum”), the swagger and panic of QOTSA (“Lo”), and one could even swear there’s a jaunty “Pyramid Song” piano piece unsubtly laced into Matthew Bellamy-esque vocals (“Poison!”).

Garden Window has an underlying fragility bedded in strength against the odds (“Easy Talk”), an unnatural volume and presence akin to Torche (“Machines Part I”), cracking at the all-consuming desire for accessibility (“Let Down”) without sacrificing an iota of personal responsibility for the source materials. It would be anathema to suggest O’Brother to be a next-gen step in prog metal’s evolution, since it draws from so many pre-existing wells–on that note, Garden Window feels really fucking loud, and does this really fucking well, permitting slight intervals to absorb the scenery a la the Tool-reminiscent “Sputnik” or closing lea “Last Breath”.

O’Brother claims to have been seeded by a gamut of artists ranging from Deftones to Mogwai (“Machines Part II”) to Sigur Ros, and it ultimately shows where we least expect it (“Cleanse Me”). Would we say Garden Window is on par with () or White Pony? Not at all, not at this considerably different juncture, but denying the obvious influences is tantamount to ignorance. O’Brother spans across a wide spectrum of flavors and emotions here, and Garden Window is, by and large, a successful 11-track record that scrapes a wide palette to enhance each nuance tastefully, movingly, manically well.