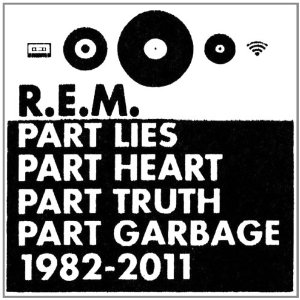 A remarkable aspect of R.E.M.’s career retrospective is that even at two discs, there are still songs missing. No “E-Bow the Letter”. No “Find the River”. No “Wolves, Lower”. Maybe they would have been included had the band dropped the final three tracks on the compilation — new songs that can hardly be considered to be among their finest. That’s the only knock you’ll find on this collection, though. You can’t fight the songs or the history, and with Part Lies, Part Heart, Part Truth, Part Garbage: 1982-2011, R.E.M. offers up a collection of songs that act more as a guide to first-time callers than a package for longtime listeners.

When a band calls it a day or an artist retires, their previous records tend to receive a boom in sales. It’s human nature. We always want to see what we missed out on, so we can regret not having been there earlier — an impossible feeling of nostalgia for something you never were part of. With R.E.M., the likely suspects for purchase are Document, Out of Time, and Automatic for the People. They contain the biggest hits from a popular culture point of view (and two of those albums are essential), but none of those has “Gardening at Night” on it.

Enter the tracklist to Part Lies. A casual listener isn’t going to flip open their laptop, head over to iTunes, and search for “New Test Leper”. In a perfect world, everyone would be doing that, but a perfect world we do not live in. So there’s “New Test Leper”, popping up after R.E.M.’s last commercial mega hit, “What’s the Frequency, Kenneth?”. Thanks to this compilation’s sequencing, the stadium rock of “Kenneth” is followed with the lines “I can’t say that I love Jesus.” Welcome to the land of R.E.M., newbie. Part pop, part political, part dumb, part thoughtful.

R.E.M.’s early years were actually all pop, with little politics. Perhaps if we could understand one word coming out of Michael Stipe’s mouth, the opinion would be a wee bit different. Regardless, the band’s run on I.R.S. is one of the greatest in recorded music. Every album is represented here from that time, so kudos to I.R.S. for letting Warner Bros. include these tracks in this compilation. The upper-register mumbles within the jangle-pop masterpiece “Gardening at Night” provide a good example of the old “R.E.M. sound.” It’s a good introduction to someone coming into the band for the first time and lays the groundwork for much of Part Lies’ first disc.

And what a first disc it is. Guitarist Peter Buck serves up his pop-punk-by-way-of-The-Byrds. In addition to the rollicking rhythm section, bassist Mike Mills and drummer Bill Berry even provide stirring harmonies to Stipe’s lead vocals and often mysterious lyrics. Their various stylings whisk and wind their way through the classic Murmur, with its best song (“Sitting Still”) thankfully included. Reckoning found the band avoiding the sophomore slump, with the haunting apologies of “So. Central Rain” and the barfly sing-along “(Don’t Go Back To) Rockville” providing evidence.

Reps from Fables of the Reconstruction and Lifes Rich Pageant continue the hot streak, offering up the pounding “Driver 8” and the stirring harmonies of “Fall on Me”. The band’s breakthrough into the mainstream is unquestionably Document, and the two reasons for that are included in Part Lies as well. Even those green (pun kind of intended) to R.E.M.’s back catalog know “The One I Love” and “It’s the End of the World As We Know It (And I Feel Fine)”. And before we know it, we enter the Warner Bros. years.

The woefully underrated Out of Time gets its representation here, and the band was kind (or cruel) enough to include the never-performed “Shiny Happy People”. The song was a big hit back in the day, and it makes complete sense to include it here. To balance its presence, the Buck-powered, Stipe-angry “Country Feedback” appears immediately before. The band’s final unanimously acclaimed album, Automatic for the People, is here, too. The big hits (“Everybody Hurts”, “Man on the Moon”) are among the first tracks on disc two. But it’s what comes after that makes this compilation truly worthwhile.

You may now be thinking, “More worthwhile than Automatic and the I.R.S. years? Blasphemy!” But take into consideration those who have not heard much of the Athens band aside from their singles from the late eighties and early nineties. Up’s “At My Most Beautiful” may be the most beautiful song the band has ever written. Reveal’s “Imitation of Life” may imitate the chords from “Man on the Moon”, but it’s really just as triumphant. If new listeners missed out the first time, they can hear the recent, charging “Living Well Is the Best Revenge” and the intimate “Ãœberlin” to understand that the band still had something left in the tank and could have gone on.

But they won’t be going on. We should be at peace with that. In recent weeks, Stipe and Mills have been giving interviews overseas, in which they seem to still get along and be absolutely content. That’s what we all want at the end of the day, when we call it a day. Part Lies is a goodbye to the fans who have been around for years but a hello to those who missed out the first time ‘round. And that is all truth.

Essential Tracks: “Sitting Still”, “At My Most Beautiful”, and “Ãœberlin”